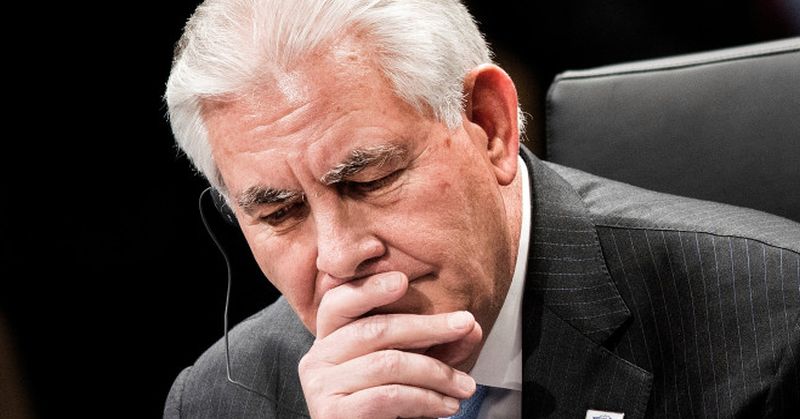 A new report claims that Secretary of State Rex Tillerson is clearing out the State Department in a move that is desperately needed to rid the government of those that won’t get on board with the new adminstration.

Staffers in the offices of deputy secretary of state for management and resources as well as counselor were shown the door Thursday, according to CBS News.

Many of those let go were on the building’s seventh floor — top-floor bigs — a symbolically important sign to the rest of the diplomatic corps that their new boss has different priorities than the last one.

The staffing changes came as Tillerson was on his first foreign trip — attending a G-20 meeting in Bonn, Germany.

“As part of the transition from one administration to the next, we continue to build out our team. The State Department is supported by a very talented group of individuals, both Republicans and Democrats,” State Department spokesman RC Hammond explained to CBS.

“We are appreciative to any American who dedicates their talents to public,” he continued.

Last month, four top officials hit the old dusty trails and at the time, a State Department spokesman said: “As is standard with every transition, the outgoing administration, in coordination with the incoming one, requested all politically appointed officers submit letters of resignation.”

Good, it’s time for the Trump administration to get their people in place after, and still amid, shameful Democrat obstruction tactics and the deep state agenda to damage the new administration.

As we’ve reported before, Obama holdovers and others that don’t want to get on board with the new agenda have apparently decided to use a variety of tactics to undermine the administration.

That is absolutely unacceptable and extremely dangerous.

Trump and his administration shouldn’t have to be fighting anti-American tools within our own government, but that’s exactly what is happening. Hopefully they do whatever they can to sort that out and if this story is true, it’s good to see Tillerson getting people in place that are ready to get the job done.