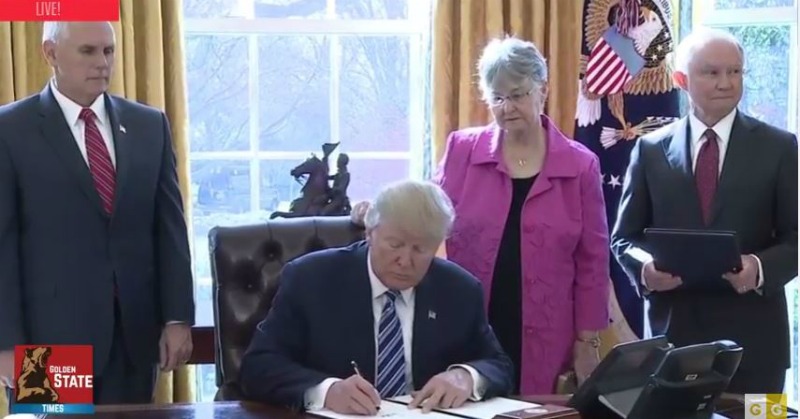 Attorney General Jeff Sessions had his swearing-in ceremony on Thursday, just prior to which President Trump rolled out three more executive orders that push forward Trump’s campaign promise to restore law and order.

“These executive actions continue to deliver on my campaign promises,” Trump said. “It’s a shame what’s been happening to our truly great law enforcement officers. That’s gonna stop as of today.”

According to Fox News: “The orders instruct the Department of Justice to go after criminal cartels, to form a taskforce to reduce violent crime in the country and to implement a plan to stop crimes targeting law enforcement officials.”

The orders were issued at the White House immediately after the swearing in of Alabama Sen. Jeff Sessions as the next U.S. Attorney General on Thursday.

Flanked by Sessions and Vice President Pence at his desk in the Oval Office, Trump first signed an order to enforce federal laws against transnational criminal organizations and international drug traffickers.

“A new era of justice begins and it begins right now,” Trump said.

The second and third orders established a task force on crime reduction and public safety and instructed the Justice Department to implement a plan to “prevent violence against federal, state, tribal and local law enforcement officials.”

“There are a lot of things that we need to do,” Sessions said in his swearing-in speech. “First, we need to value and support and encourage the fabulous people who work there. I’ve worked with them over the years. I know how good they are, and their talents need to be directed at this nation’s benefit in a lot of different ways.”

“We have a crime problem. I wish the blip — I wish the rise that we’re seeing in crime in America today were some sort of aberration or a blip,” Sessions said.

“My best judgment, having been involved in criminal law enforcement for many years, is that this is a dangerous, permanent trend that places the health and safety of the American people [at] risk.”

He continued, “We will deploy the talents and abilities of the Department of Justice in the most effective way possible to confront this rise in crime and to protect the people of our country.”