The first thing most politicians are told by advisers is to never write stupid things on social media, ever. Why? Because there is always someone watching.

A Maine State Representative apparently didn’t heed this warning, and wrote a horrifying diatribe against President Trump and Trump supporters, some he actually represents in the state, in which it appears he threatens the President’s life. The Facebook post has since been removed, but it was captured and you can read it below: 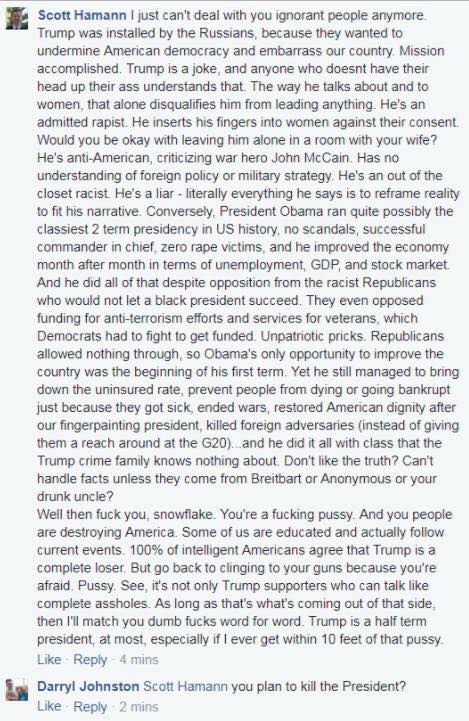 Scott Hamann is a third-term Democrat Representative for part of South Portland, Maine, and Cape Elizabeth.  Ironically, he serves on the legislature’s Health and Human Services Committee. Typically, people who serve on this committee are supposed to care about the health and well-being of others, unless you’re Scott Hamann, apparently, and you hate Trump and his supporters.

Hamann was even questioned on his post if his intent was to kill the President. Rather than get the wake-up call about his words, he continued. In a response to someone who posted the good things he thought Trump has been doing, Hamann appears to threaten the man’s wife or girlfriend: 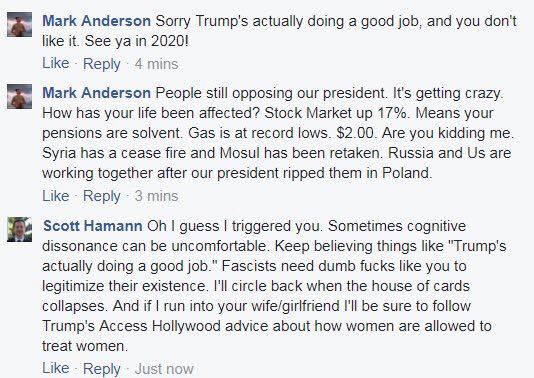 Someone contacted Hamann’s employer, since he’s a public figure. He works for a food bank whose purpose is to “help solve hunger.” It seems Hamann doesn’t have the same goodness of heart as his employers: 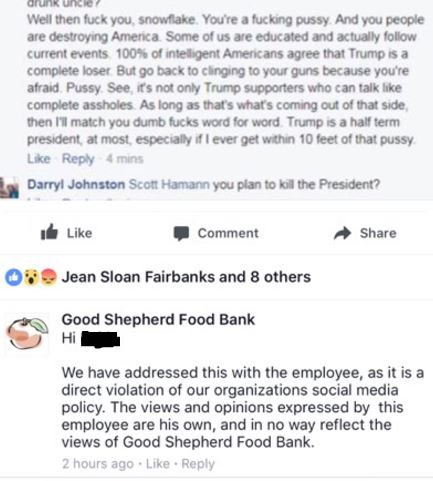 Hamann admitted that he wrote the post in a message to someone, and tried to claim it was just “banter” between him and a friend:

And then Hamann threatened the person in a message:

Hamann seems to be a bit unhinged. It’s been months since Trump has been elected, and he’s freaking out and even appears to be threatening the President. This isn’t just some random putz posting on Facebook. This is a man who actually represents people in the Maine Legislature, including those who voted for Trump.

After the terrifying attack on Republicans during a charity baseball practice in which Representative Steve Scalise was shot, you would think Democrats would be able to control their vitriolic and violent rhetoric towards the President.

The screenshots were forwarded to Keith Hanson, host of “First Look” and “The Keith Hanson Show” on FOX News affiliate radio WNTK and WUVR broadcasting in New Hampshire and Vermont.