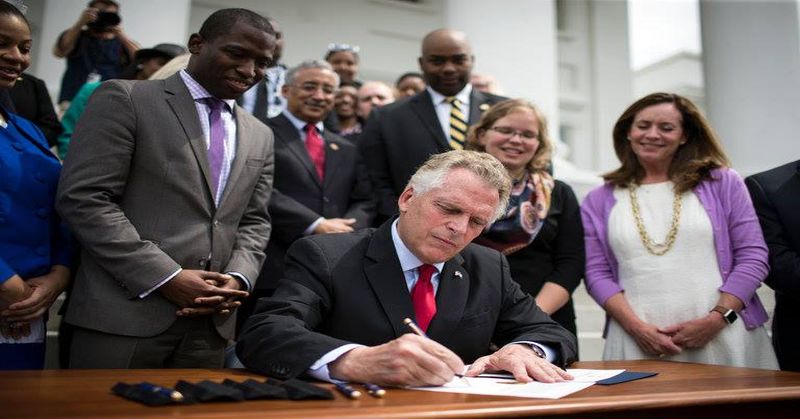 Governor McAuliffe is VIOLATING court order in this tyrannical sweep of suffrage clemency. Not only that, this is clearly attempt to acquire more Democratic votes for the presidential election this fall.

McAuliffe’s planned action, confirmed by two people with knowledge of it, comes about a month after the Supreme Court of Virginia invalidated an executive order the Democratic governor issued in April. With that order, McAuliffe restored voting rights to more than 200,000 felons who had completed their sentences.

Republicans, incensed that it covered violent and nonviolent offenders alike, said the move was really a bid to add Democrat-friendly voters to the rolls ahead of November’s presidential elections, when the governor’s close friend and political ally, Hillary Clinton, will be on the ballot.

Republicans also found the McAuliffe administration had mistakenly restored rights to 132 sex offenders still in custody and to several convicted murderers on probation in other states.

To defy the court order, McAuliffe “vowed to use an autopen to individually sign orders restoring rights.”

Can we not see what is going on here? In his haste to acquire votes for Hillary, McAuliffe accidentally provided voting rights to a “noncitizen sex offender in Peru.” Whatever you want to say about the Democratic presidential nominee, her skills rival that of a magician. She makes indictments and health reports disappear and Democratic voters appear from thin air.