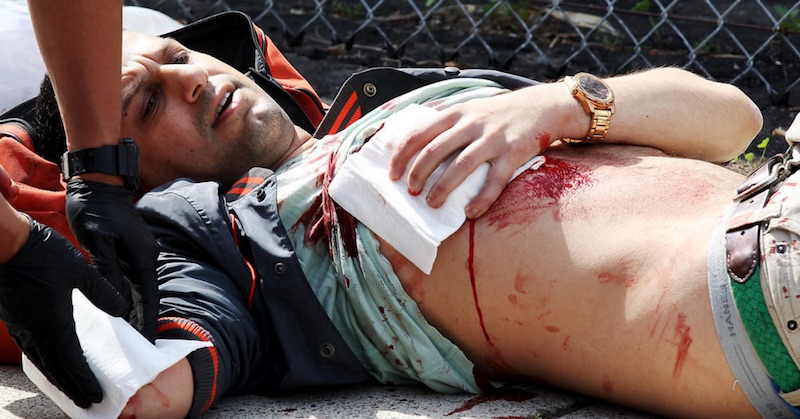 Trying to sow the seeds of chaos, the Islamic State is encouraging its members, followers and “lone wolves” to stage knife attacks in typically ordinary locations.

In the ISIS propaganda magazine Rumiyah, released online, they try to convince their adherents to get of any squeamishness over using knives and other sharp objects to stage attacks, saying they are easily and “widely available” weapons useful for nighttime stabbing campaigns, PJMedia is reporting.

Related: Move Over Hillary Clinton – ISIS Has Coloring Book That Puts Yours To Shame

It is the second issue of the monthly “web-zine.” In their “premier” issue, they advised jihadists to target children playing sports after school or even “flower sellers” with carts on street corners.

In the new PDF issue distributed widely via social media and Google Drive, an article on terror tactics assures would-be jihadists that “one need not be a military expert or a martial arts master, or even own a gun or rifle in order to carry out a massacre or to kill and injure several disbelievers and terrorize an entire nation.”

As a footnote to the article, ISIS said they’re no longer going to use the term “lone wolf” to describe their operatives who work independently, instead they’ll call them “just terror operations,” with “just” being an abbreviated form of “justice.”

Telling the reader that the pro-knife-attack article will only be the first in a series, the Islamic State focuses on “the benefits of knives to help potential terrorists with the “ocean of thoughts” that “might pour into one’s mind” when considering an attack.”

“Many people are often squeamish of the thought of plunging a sharp object into another person’s flesh. It is a discomfort caused by the untamed, inherent dislike for pain and death, especially after ‘modernization’ distanced males from partaking in the slaughtering of livestock for food and the striking of the enemy in war,” the article states. “However, any such squirms and discomforts are never an excuse for abandoning jihad.”

ISIS is encouraging a “campaign of knife attacks” where the terrorist “could dispose of his weapon after each use, finding no difficulty in acquiring another one.”

“It is explicitly advised not to use kitchen knives, as their basic structure is not designed to handle the kind of vigorous application used for assassinations and slaughter,” the article states, further advising “to avoid troublesome knives, those that can cause harm to the user because of poor manufacturing.”

In the last several months, there have been numerous high-profile knife attacks inspired by ISIS, from an attack in Roanoke, Virginia, in August, to attacks in Australia and Germany and the deadly attack at a Minnesota mall last month.