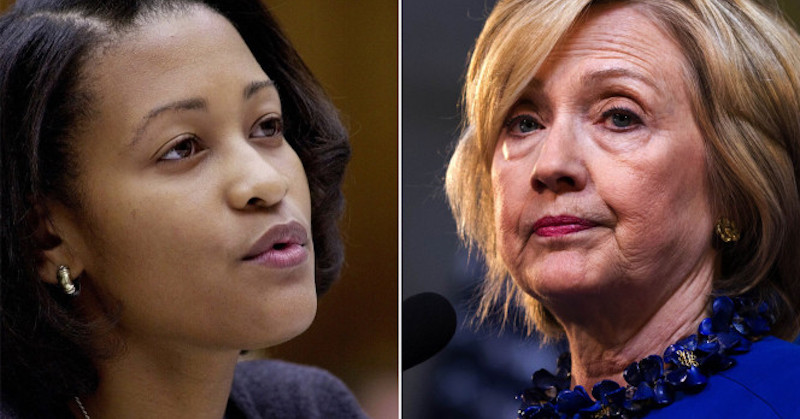 She seems to be Hillary’s “fixer.”

Hillary Clinton’s chief counsel Cheryl Mills has her hands in almost every seedy, unscrupulous thing that Hillary has been engaged in, newly released FBI documents show, painting a picture of a powerful and influential lawyer who has been by her side from the beginning.

It seems clear now that her primary role lately has been to cover up evidence and hide it from investigators. So brazen is her influence, the FBI even let her attend Hillary’s interviews at the FBI headquarters as one of her lawyers.

The “smoking gun,” as The New York Post puts it, is on page 17 of the FBI’s report, detailing how Mills decided exactly which emails should be kept and which should be destroyed. She alone was able to make the decision, and the FBI found that pretty suspicious:

For starters, Mills was the one who ordered the server host to move the emails from the server to a laptop where she could screen them. She told investigators she could “not recall” if emails with non-gov addresses were included in the transfer. It’s unlikely they were, because an aide who helped her search told the FBI she only screened for emails sent to or from Clinton with .gov and .mil — not .com — addresses.

That means messages involving government business between Clinton and her then-deputy chief of staff Huma Abedin — the only aide who had an email account on the clintonemail.com system— were not likely captured. Nor were messages sent between Clinton and Mills and other aides using personal email addresses.

Communication between Abedin and Clinton would be crucial in the investigation, because Abedin was the go-between in the wrangling between the Clinton Foundation and Hillary. Judicial Watch President Tom Fitton said that the “pay to play” relationship between the foundation and State was the entire reason for the private email server in the first place.

“The whole thing was designed to keep Clinton Foundation emails away from investigators,” he said. “It was clear they did not want non-.gov related emails picked up in their search, so they said, let’s search in a way that those emails won’t be picked up; and if they are picked up, we’ll have Mills come in and shred them.”

Amazingly, the “keyword search” that Mills used to determine which emails were personal and which were not was not given to the FBI. Mills asserted that such information was “privileged.”

When Mills was pressed to provide the information, Mills stormed out of the room and ended the interview. Amazingly, the FBI did not pursue the matter further.

Mills never actually conducted a thorough search of Hillary’s server and everyone knew it.

“The FBI saw massive document destruction and clear intent to withhold material evidence,” he added, “and they just ignored that obstruction.”

And people still wonder whether or not Hillary’s getting special treatment from the FBI.