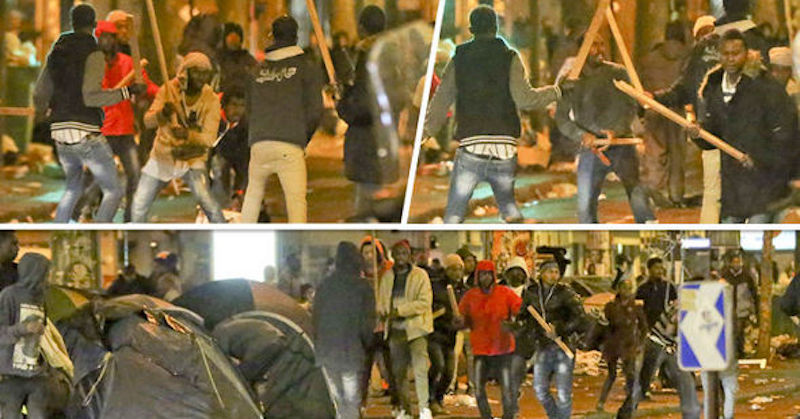 The streets of Paris are a war zone right now with migrants fighting in running battles with authorities Wednesday morning, beating witnesses, onlookers and others with wooden clubs and anything they can get their hands on.

The area around a metro station was turned into a battlefield as refugee rival gangs of migrants battled each other in shocking scenes of violence.

Wearing hooded tops to mask their identity and wielding makeshift clubs and bats, they bludgeoned each other as horrified passengers looked on, The Express is reporting.

The bloody brawl erupted yards from the Stalingrad Metro station where sordid migrant camps had popped up following the destruction of the Calais “Jungle.” It was not clear if it was the same people who were responsible for the violence that brought an end to the Jungle who were involved in this violence. 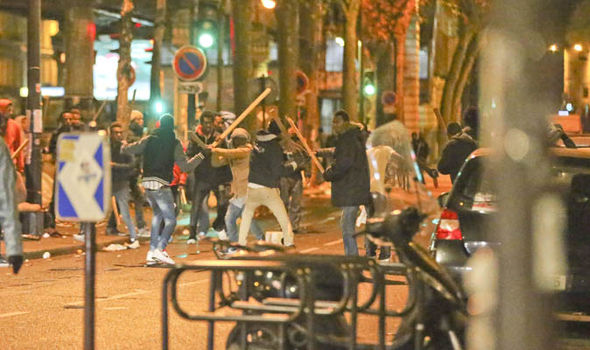 Despite the violence, residents are planning on staging a “pro-migrant” rally at that camp at 6 p.m. local time Wednesday.

The once peaceful neighborhood, in Paris’ 10th Arrondissement, used to be a popular area with tourists, boasting a lively nightlife scene bustling with restaurants and bars.

But worried residents have revealed how it has become a no go zone in recent weeks following the establishment of the refugee camp, which has brought squalor and violence.

Thousands of migrants – mostly from Sudan, Libya, Afghanistan, and Eritrea – have pitched tents under the Metro station after the demolition of the Jungle hampered their attempts to reach Britain.

French police have tried and failed on many occasions to clear the squalid squat, but asylum seekers simply keep on returning and reestablishing it.

There are now more than 2,500 refugees living in the makeshift camp – locals saying the eyesore is ruining their businesses and making life a “living hell.” 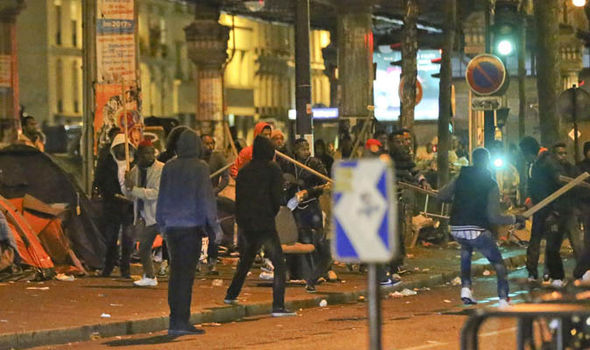 Residents in the district say the squatters are increasingly becoming dangerous and violent, with increased reports of muggings and robberies.

Faisal, a shopkeeper, told the French daily Le Figaro that Stalingrad locals are living in fear, threatening the future of his business.

He said: “The stench of urine, feces, and rubbish has made Stalingrad an insalubrious place to live. The place is dead – no-one wants to come here anymore. People are afraid to go out and lock themselves in.

“French people have been kind to them. I know they’re desperate, but the least they can do is respect the law and try and integrate into French society.”