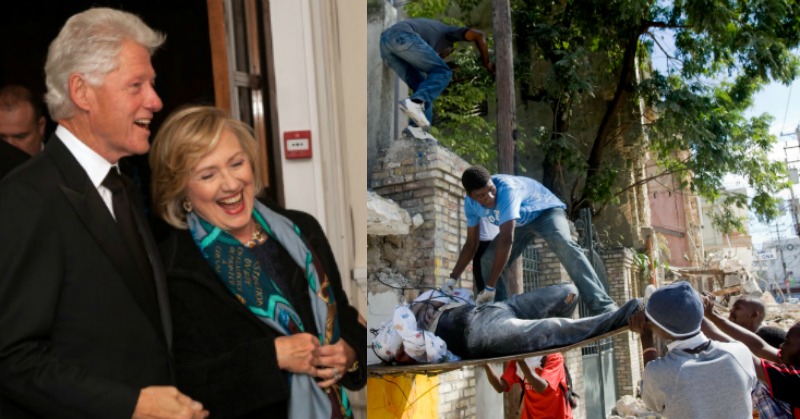 ABC news received some damning emails from the Clinton Foundation via a Freedom of Information Act request that show how the foundation even used the crisis in Haiti to fill their coffers and extend favors to donors and friends. As the New York Post noted — the foundation hasn’t even denied the disturbing revelations.

According to the Clintons, there was no impropriety at the Clinton Foundation. There wasn’t a pay-to-play scheme operated while Hillary Clinton was head of the State Department, which we all know is a massive lie.

But these emails proved, in detail, that the Clinton Foundation didn’t just trade favors, they even flagged certain individuals as “Friends of Bill” or “FOB,” for lucrative Haiti aid positions doled out by the State Department, regardless of their qualifications.

In the wake of the devastation in Haiti after the 2010 earthquake, the Clintons and their friends swooped in to profit off of the people’s suffering.

Indeed, the [State Department] aide, Caitlin Klevorick, kept asking foundation official Amitabh Desai “to flag when people are friends of WJC” — William Jefferson Clinton. Anyone without a special tag (FOB, WJC-VIP) got rebuffed by State and referred to a federal website.

State was besieged with requests to get in on $10 billion in aid contracts, described in one government cable as “a gold rush.”

One FOB, a major foundation donor who’d served as Bill’s Texas chair, used his pull on behalf of a firm he admitted “wanted to get some of the business” and had him use the Clinton Foundation as “a facilitator.”

Klevorick told ABC, according to the Post, that the flags were to expedite the process of finding those with a history in Haiti in order “to get the necessary resources to the right places as soon as possible to save lives.”

Oh that’s cute, but not so fast Klevorick. There’s a major problem with this claim, and it lies in the fact that, according to the Post, the only question asked was: “Is this a FOB?” The only instruction given to the foundation was to make sure that FOBs got flagged.

“I think when you look at both the State Department and the Clinton Foundation in Haiti, that line was pretty faint between the two,” Jake Johnston, a Haiti analyst for the nonpartisan Center for Economic and Policy Research, told ABC News. “You had a lot of coordination and connection between the two, obviously. And I think that raises significant questions about how they were both operating.”

As the media clutches their pearls over Donald Trump’s comments, the Clinton Foundation and their buddies made money off of the backs of Haitians reeling from a devastating earthquake.

This, and much worse, is what we can look forward to if Hillary Clinton is elected in November.