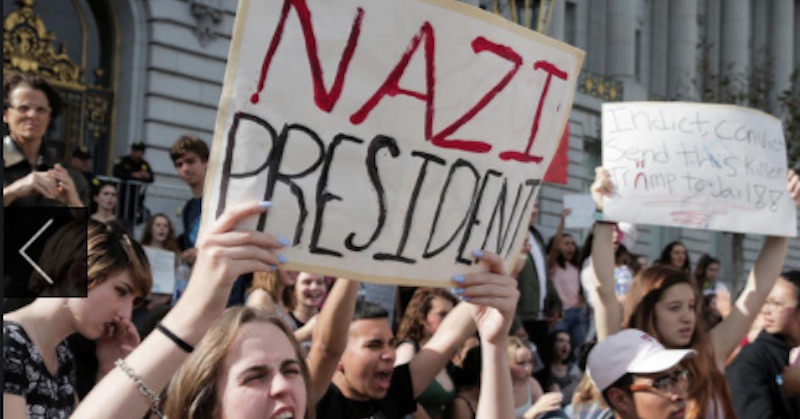 Leftist agitators in more than 20 cities are being offered $2,500 to protest, demonstrate and cause mayhem at Donald Trump’s inauguration.

A San Francisco company that calls itself the “largest private grassroots support organization in the United States,” placed identical ads on Jan. 12 on the site backpage.com.

Here’s the one on the Tulsa, Oklahoma site: 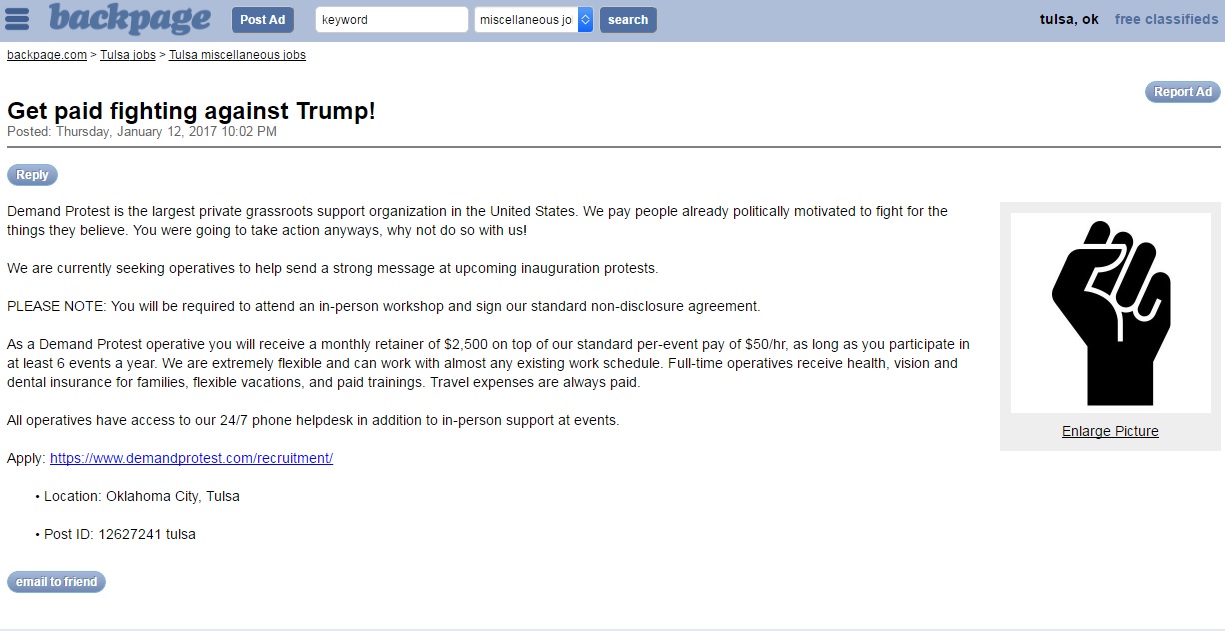 The text of the ad – appearing in cities across the country – read:

Demand Protest is the largest private grassroots support organization in the United States. We pay people already politically motivated to fight for the things they believe. You were going to take action anyways, why not do so with us!

We are currently seeking operatives to help send a strong message at upcoming inauguration protests.

PLEASE NOTE: You will be required to attend an in-person workshop and sign our standard non-disclosure agreement.

As a Demand Protest operative you will receive a monthly retainer of $2,500 on top of our standard per-event pay of $50/hr, as long as you participate in at least 6 events a year. We are extremely flexible and can work with almost any existing work schedule. Full-time operatives receive health, vision and dental insurance for families, flexible vacations, and paid trainings. Travel expenses are always paid.

All operatives have access to our 24/7 phone helpdesk in addition to in-person support at events.

Trump has long argued that much of the protest involves paid activists ad agitators. Despite the evidence, the mainstream media continue to believe that all opposition is merely “Grassroots,” The Washington Times is reporting.

“There’s simply no credible evidence that the opposition to Trump is spurred by anything other than legitimate concern about what his presidency might entail,” said a Nov. 17 column in the Washington Post’s The Fix.

PolitiFact reported that a widely shared Nov. 11 article claiming an anti-Trump protester was paid $3,500 was fake news created by Paul Horner, who runs a number of phony news sites.

The website says is has 1,817 “operatives” for 48 “campaigns,” and are able to fool the media and the public into believing their paid, coordinated efforts are grassroots.

“We can ensure that all actions will appear genuine to media and public observers,” they wrote:

“We are strategists mobilizing millennials across the globe with seeded audiences and desirable messages,” says the website. “With absolute discretion a top priority, our operatives create convincing scenes that become the building blocks of massive movements. When you need the appearance of outrage, we are able to deliver it at scale while keeping your reputation intact.”

Did you get that? The “Appearance of Outrage.”