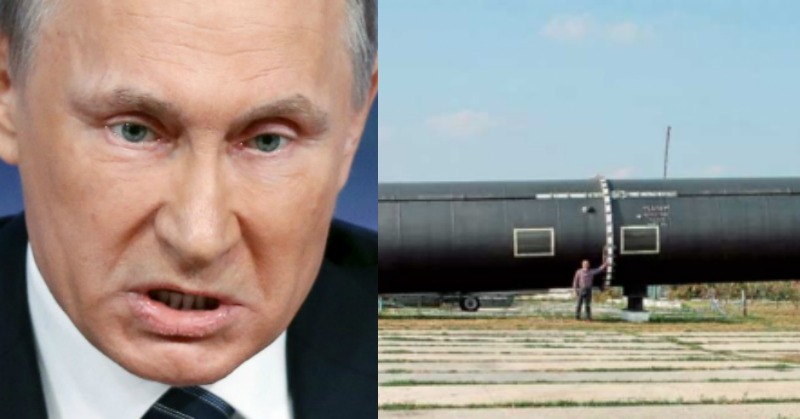 Russia unveiled a weapon capable of reaching United States territory recently, and on its heels, Russian President Vladimir Putin said that the actions undertaken in Washington are “pushing Russia into a nuclear arms race,” according to Zero Hedge.

The Makeyev Design Bureau – the designer of Russia’s heavy liquid fuelled Intercontinental Ballistic Missiles (“ICBMs”) – ie. of missiles capable of reaching US territory from Russian territory, has published the first picture of Russia’s new heavy Sarmat ICBM which is due to enter service shortly, probably in 2018.

The Makeyev Design Bureau also released this statement along with the picture of the Sarmat ICBM:

“In accordance with the Decree of the Russian Government ‘On the State Defence Order for 2010 and the planning period 2012-2013,’ the Makeyev Rocket Design Bureau was instructed to start design and development work on the Sarmat. In June 2011, the Bureau and the Russian Ministry of Defense signed a state contract for the Sarmat’s development.  The prospective strategic missile system is being developed in order to assuredly and effectively fulfil objectives of nuclear deterrent by Russia’s strategic forces.”

As Zero Hedge noted, the Sarmat has a specific goal of evading U.S. anti-ballistic missile systems that have been deployed in Eastern Europe.

This is yet another reason why we need a president who understands the importance of modernizing and beefing up our military in these uncertain times.

While the U.S. stays stuck in the 1960’s and 1970’s with our strategic deterrents, Russia is working to upgrade their armory. The new Sarmat missile is set to be ready to go in 2018.

AntiWar’s Jason Ditz had this to say about the situation between the U.S. and Russia in regard to our respective military capabilities:

Of course, the United States spends many, many times what Russia does on its military, but the fact that Russia has a proper military capable of defending the nation at all puts it in a total different category from most of America’s recent wars, and Russia’s massive nuclear arsenal makes it clear this is one war which, if the US launches it, they won’t be able to win outright.

Democrat presidential nominee Hillary Clinton has called for a no-fly zone over Syria. Here’s what Chairman of the Joint Chiefs of Staff, Gen. Joseph Dunford, had to say about that.

“Right now, Senator, for us to control all of the airspace in Syria it would require us to go to war, against Syria and Russia,” he said. “That’s a pretty fundamental decision that certainly I’m not going to make.”

Clinton’s track record — both in action and in words — proves that she does not have the judgment necessary to be president.