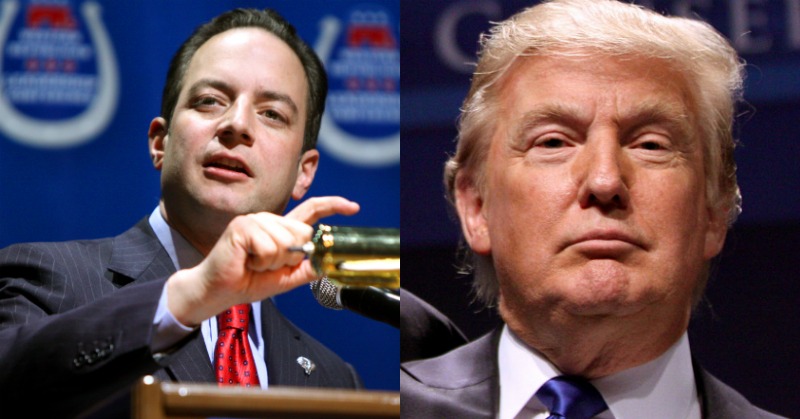 After , Speaker of the House Paul Ryan declared he wouldn’t support GOP nominee Donald Trump and rumors circulated that the Republican National Committee was diverting funds away from the nominee, it seemed as if Trump had been abandoned by the GOP.

Not so fast, according to RNC Chairman Reince Priebus. The committee has not dropped its support of Trump in response to the release of lewd comments he made 11 years ago in a video released over the weekend.

“Over the last 24 to 48 hours there have been a lot of false rumors that we didn’t want to engage in,” Priebus told 168 RNC members via a conference call on Monday, according to Politico via an individual who was on the call.

“Nothing has changed in terms of our support for the nominee.” Priebus said and noted that Trump offered a “heartfelt” apology.

“I think the issue was taken care of at the debate,” Priebus said. According to Politico, the comments were verified by three people who were on the conference call.

After the Trump video was released and numerous cowards in the Republican Party withdrew their feckless support, it seemed as if the Trump campaign was on the precipice.

Trump has had to go up against an establishment that doesn’t want him and has actively opposed him at every turn. Before Sunday’s debate, it was abundantly clear that it was do or die time for the Trump campaign.

Despite a massively rigged debate with moderators that were actively participating in the debate as shills for the Hillary Clinton campaign — interrupting and debating Trump on her behalf — Trump dominated Clinton.

Trump’s strong performance in the face of massive opposition coupled with the wave of emails released about Clinton made it abundantly clear that it ain’t over ’til the corrupt woman cackles all the way to prison, where she belongs.

Americans need to remember one important thing that the mainstream media and establishment politicians don’t want you to know — this election isn’t about Trump. This election is about the future of our country, and that pits us against an elitist establishment that is set to destroy America as we know it.

It will be an uphill battle to defeat not just Clinton but an entire establishment that is hellbent on taking down Trump. It won’t be easy for Trump to beat the rigged system, but his debate performance last night showed that he’s not about to give up and that means neither should we.