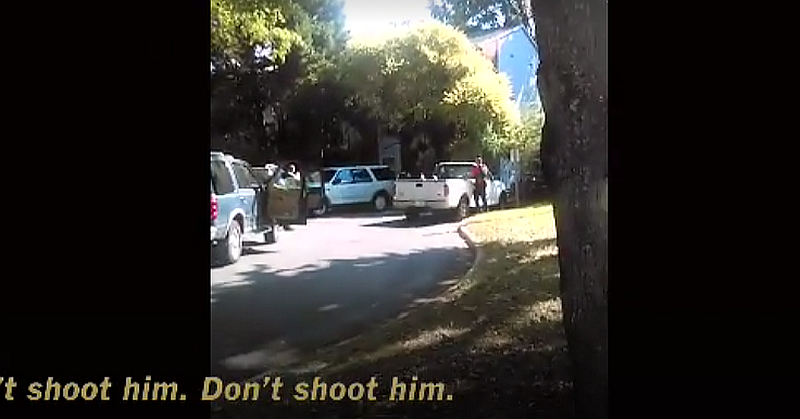 Until this point, existing video footage of the police encounter that led to the death of Keith Lamont Scott in Charlotte, North Carolina has been withheld by officials as it is an ongoing investigation. However, Scott’s wife took video of the situation herself, and has since released this video to The New York Times through her lawyer.

This is not the dashboard camera footage from the officers, but a video shot by Scott’s wife on her phone. Watch the clip below.

The Times provided a transcript of the encounter:

RAKEYIA SCOTT: He didn’t do anything.

RAKEYIA SCOTT: He doesn’t have a gun. He has a T.B.I. (Traumatic Brain Injury).

RAKEYIA SCOTT: He is not going to do anything to you guys.

OFFICER: Drop the gun. Let me get a fucking baton over here. [muffled]

RAKEYIA SCOTT: Keith, don’t let them break the windows. Come on out the car.

RAKEYIA SCOTT: Keith! Don’t you do it.

OFFICER: Is everybody good? Are you good?

RAKEYIA SCOTT: He good. Nobody … touch nobody, so they’re all good.

The camera unfortunately does not show the exact moment when the officers fired on Scott, but what is clearly head multiple times is the officers instructing Scott to drop the gun (no indication of a book anywhere here).

We reported earlier that the Scott family and their attorney were given access to the video footage from the officers’ cameras, only to reply with “No comment” when asked about the content.

The investigation is still ongoing, as are the protests in Charlotte.