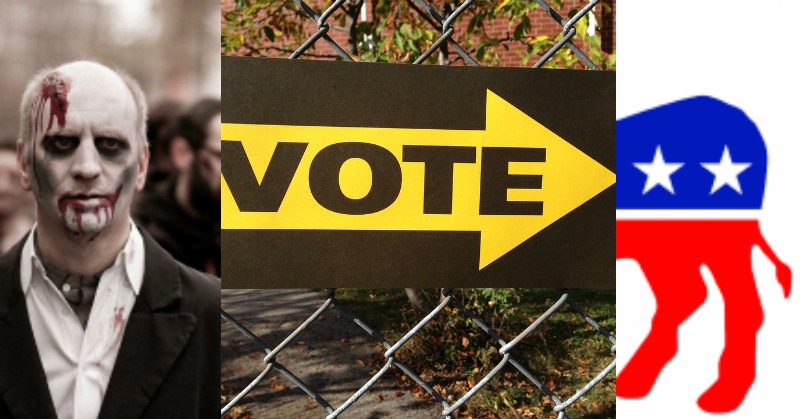 Democrats prey on two distinct types of people these days; those who choose not to use their brains and those who are incapable of doing so. In Virginia, Dems have focused on the latter in their get-out-the-vote efforts.

In Harrisonburg, Virginia, 19 dead people were re-registered to vote. They were initially registered to vote in the Shenandoah Valley town when they were living, but postmortem, Dems decided to give them a reincarnation ballot.

The Washington Post reported that one case was unearthed after the family of one of the deceased voters received a note that congratulated their relative for registering, according to Rockingham County Commonwealth’s Attorney Marsha Garst.

Garst spoke about the case on Thursday: “His family members were very distraught.” Garst couldn’t offer many details because the FBI and local police are currently investigating the fraud — but she did confirm the investigation was underway.

“He was a retired Fairfax County elementary school principal and had fought in World War II,” Claybrook Jr. said of his father. “So our family is very disgusted that they would pick his name because he was such a law-abiding citizen devoted to public service.”

“All of the forms had been submitted by a private group that was working to register voters on the campus of James Madison University, according to the Harrisonburg registrar’s office. The group was not identified. No charges have been filed.”

Republicans across the country have called for stricter voter ID laws, including Republicans in the Virginia House of Delegates who held a conference call with reporters to let the public know about this investigation.

House Speaker William J. Howell (R-Stafford) spoke about the investigation: “Oftentimes we hear our Democratic colleagues suggest that voter fraud doesn’t exist in Virginia, or it’s a myth.” He added, “This is proof that voter fraud not only exists but is ongoing and is a threat to the integrity of our elections.”

A state house Democrat provided one of the most hilariously ridiculous excuses — and given his party affiliation, that’s saying something.

“First of all, there was no voter fraud — they caught him,” House Minority Leader David Toscano (D-Charlottesville) said. “Nobody cast a vote … There’s still no evidence of that going on in the state. But there is evidence every time you turn around that the Republicans are trying to make it more difficult for citizens to vote in elections.”

Republicans would like to make it more difficult for Democrats to create an army of “Zombiecrat” voters, that’s true. But hey, according to Toscano, it’s no big deal. They tried to defraud the system but they got caught, so no big whoop right?

That’s the Democrats for you…