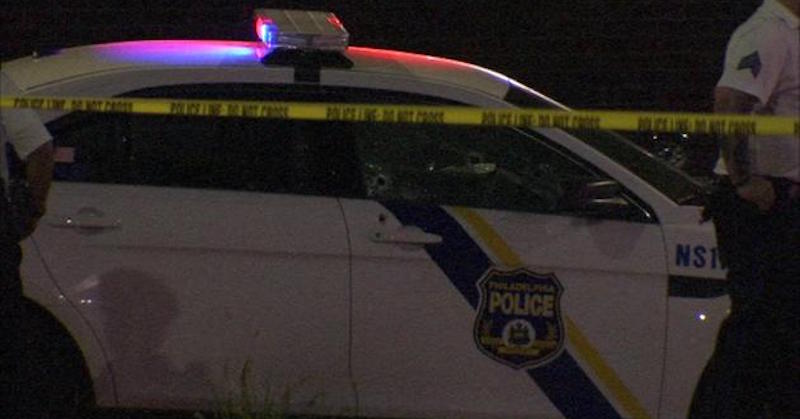 This is why people say that “Blue Lives Matter:”

Two police officers and five others were shot in an ambush-style attack in a West Philadelphia neighborhood. The gunman and one civilian are dead.

The chaos erupted at about 11:20 p.m. Friday. Police report that Sgt. Sylvia Young, a 19-year veteran of the Philadelphia Police Department, was in her patrol car when she was ambushed by the suspect.

She was shot eight times, mostly in the arm. Luckily, she was wearing a bullet-proof vest which protected her from the assault.

The suspect then fled on foot and police gave chase, 6ABC is reporting.

As he was fleeing, the suspect fired shots into the Maximum Level Lounge, striking a security guard in the leg.

Then – amazingly, the suspect grabbed a woman and used her as a human shield to protect himself from officers. He then shot her in the leg and continued fleeing.

Then he fired shots into a white vehicle, hitting the two passengers in the chest. One of those victims, a woman, was later pronounced dead.

The chase continued and devolved into a shootout with police.

One officer, with the University of Pennsylvania Police Department, was shot in the leg and buttocks. Eventually the suspect was shot and killed.

Both police officers were rushed to Penn Presbyterian Medical Center in stable condition. They are reportedly awake and talking.

A perimeter was set up between Market and Pine streets and 47th and 53rd streets. No one was allowed in or out during the search for a possible second suspect.

In a press conference, Commissioner Richard Ross said police found a note at the scene stating the suspect hated cops and probation officers.

Police say officers will be riding two to a car until further notice.

Philadelphia Mayor Jim Kenney spoke to Action News on his meeting with the police officers.

“I had the opportunity to be with both police officers this evening, and their families. One officer was cracking jokes with his kids and wife. The other officer was talking with her family. So we are happy, very blessed that that’s the way it turned out. I think we have to keep them in our prayers. The civilians, there are some seriously hurt, and still in various degrees of being treated. And I think all in all it was really a terrible scary night. But our officers turned out okay, and hopefully the civilians will turn out okay,” said Mayor Kenney.