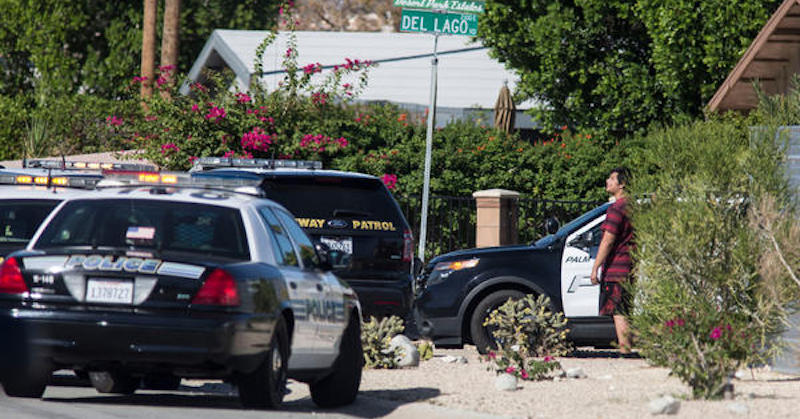 Two police officers were killed and one injured in a shooting in Palm Springs.

Dozens of police had surrounded a house where the suspect was allegedly held up, while officers took defensive positions behind patrol cars and concrete walls.

Palm Springs police have not released many details on the officers’ conditions, but one anonymous source told The Los Angeles Times that one of the officers had died and another was critical wounded. Families were being rushed to the hospital to be with the shot police.

As of press time, police said they were dealing with an “active scene” that was unfolding near Racquet Club Road and Sunrise Way.

Palm Spring Police Sergeant William Hutchinson said someone opened fire on officers who were responding to a family disturbance call.

Hutchinson said police don’t have a suspect in custody and have multiple SWAT teams combing the area. The department sent out a “code red alert” and people in several nearby blocks were being evacuated.

“If you do live somewhere in the area, keep your doors locked,” Hutchinson said. “Please do not answer your doors for anybody.”

The original call was related to a family disturbance, an official said. An argument between a father and son had turned violent.

SWAT teams were currently in the area looking for the suspects, The Desert Sun is reporting.

Reached by phone just before 3 p.m., a manager of a nearby hotel said a helicopter had been circling overhead for the past hour and a half.

Alex Thomas, a manager at The Monkey Tree Hotel, which sits on Racquet Club Road, about half a mile east on the scene, estimated that about 10 squad cars had raced down the road, their sirens blaring, within the last hour.

She said she did not hear or see any shots fired, or know why police were swarming the scene.

But she described the areas as “real residential.”

“There’s a little school next to us,” she said. “We’re about the only business.”

So, she added, having a helicopter buzzing about was “highly unusual.”

The shooting comes four days after a Los Angeles County sheriff’s sergeant was fatally shot during a burglary call in Lancaster. Authorities allege that the lawman was “executed” by the suspect, who was later captured.