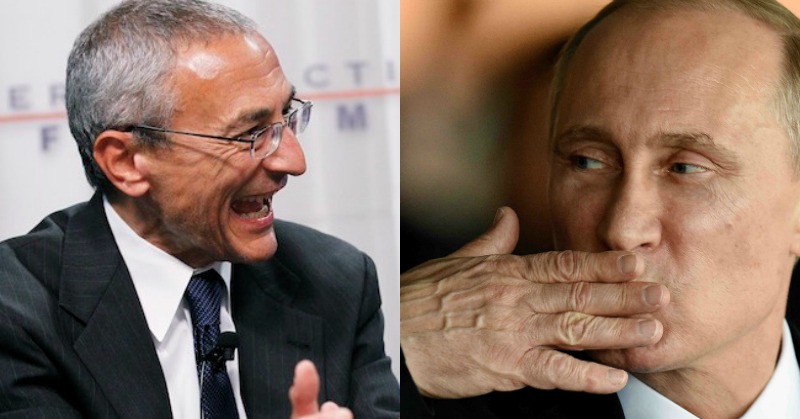 Democrat presidential nominee Hillary Clinton and her campaign have tried to deflect from the damning inside information revealed about them in the WikiLeaks email releases by claiming that GOP nominee Donald Trump is connected to the Kremlin. But in a recently released email from the account of Clinton campaign chairman John Podesta, it was proven that, once again, it’s Clinton and her cronies who have Kremlin connections.

An email uncovered in the Wikileaks hacks reveals that Hillary Clinton campaign chairman John Podesta’s “75,000 common shares” — obtained from his membership on the executive board of an energy company, Joule Unlimited, which received millions from a Putin-connected Russian government fund — were transferred to his daughter, Megan Rouse.

A January 3, 2014 letter revealed that Podesta designated his daughter’s Dublin, California residence as the address for Leonidio Holdings LLC, the Delaware-based holding company that Podesta used to transfer his shares in Russian-related Joule Global Holdings.

Podesta’s membership on the board of directors of Joule Unlimited was first revealed in research from Breitbart News Senior Editor-at-Large and Government Accountability Institute (GAI) President Peter Schweizer.

The GAI report, tilted, “From Russia with Money: Hillary Clinton, the Russian Reset, and Cronyism,” reported that Podesta joined the Joule Unlimited board in June 2011.

“Two months after Podesta joined the board, Vladimir Putin’s Rusnano announced that it would invest up to one billion rubles into Joule Unlimited, which amounts to $35 million. That represents one-fifth of the entire amount of investment dollars Joule collected from 2007 to 2013,” the GAI report concludes.

Financial documents have Rouse listed as a “managing member” of Leonidio Holdings LLC.

“It is my understanding that John transferred the resulting 75,000 common shares from the option exercise to the Leonidio LLC.,”  Senior Vice President and General Counsel at Joule Unlimited Technologies, Inc., Mark Solakian, wrote in a January 2014 email. “As such, we would need to edit the Transfer of Share Agreement to reflect the transfer of 75,000 common shares to the LLC.”

Podesta didn’t disclose his position on the board of directors for Joule Unlimited when he took on the role of President Obama’s senior adviser in 2014 — nor did he include it in his financial disclosures despite being required to do so by law.

“The disclosure that Clinton Chair John Podesta transferred his shares in Putin-backed Joule Unlimited to an anonymous holding company when he joined the Obama Administration is extremely concerning.

“Because the holding company is completely anonymous, we do not know whether or not he still has deep financial ties to Vladimir Putin and his regime,” Miller’s statement read. “As such, Mr. Podesta needs to either reveal who is behind the holding company or he must resign from the Clinton campaign immediately.”

Well, well, well — once again we find that if anyone is connected to the Kremlin and Russia, it’s Clinton and her cronies. The Clinton campaign has tried to create connections between Trump and Russia where there are none to deflect from their own dirty dealings.

The State Department, under the leadership of Hillary Clinton, approved a deal that ceded 20 percent of our uranium control to the Russians — a deal that has massive national security implications.

Hopefully enough voters will look at the evidence and not the blatant deflection tactics and lies spread by the Clinton campaign.