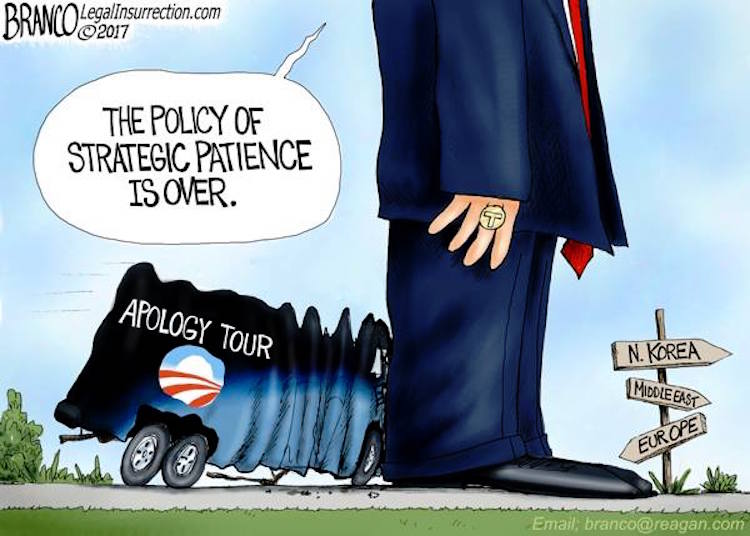 C.E. Dyer reports that the Trump administration has made it clear in a short period of time that Obama-era foreign policy is no more. Recently, Vice President Mike Pence made it clear that the strategy of “strategic patience” with North Korea was done, and now Secretary of State Rex Tillerson has said the same, this time about Iran.

Tillerson calls for end to failed Obama-era Iran policies. “Strategic patience is a failed approach,” Tillerson said as part of his remarks from the State Department. “In deed and in propaganda, Iran foments discord.”

The secretary of state went on to detail an extensive list of problems with Iran, which include their position as the world’s foremost state sponsor of terrorism and their hostility toward Israel (i.e., wanting them blown off the map).

Tillerson went on to criticize the Iran nuclear deal as an epic failure that will not continue under the Trump administration.

“The JCPOA fails to achieve the objective of a non-nuclear Iran, it only delays they goal of becoming a nuclear state,” Tillerson said, referring to the Iran nuclear deal by its formal acronym. “The Trump administration has no intention of passing the buck to a future administration on Iran.”

“It is another example of buying off a power who has nuclear ambitions. We buy them off for a short period of time, and then someone has to deal with it later,” Tillerson continued. “We just don’t see that that’s a prudent way to be dealing with Iran, certainly not in the context of all their other destructive activities.”

Sec. of State Tillerson: "Iran is the world's leading state sponsor of terrorism. It is responsible for intensifying multiple conflicts." pic.twitter.com/EZsE5I6p9v

Secretary of State Rex Tillerson: "We have to look at Iran in a very comprehensive way" https://t.co/6OZtrfIwim https://t.co/F1hpEPqkyG

What preceded the statement. The Washington Examiner reported: “Tillerson made that statement following a late-night notification to Congress that Iran is in compliance with the terms of the nuclear deal, but that its ongoing support for terrorism had motivated the Trump team to consider re-imposing sanctions lifted under the deal.”

What this means. It’s hard to say for sure what the administration will do, though if they follow through with Tillerson’s comments here, it should mean an end to the insane coddling and propping up of Iran that the Obama administration engaged in.