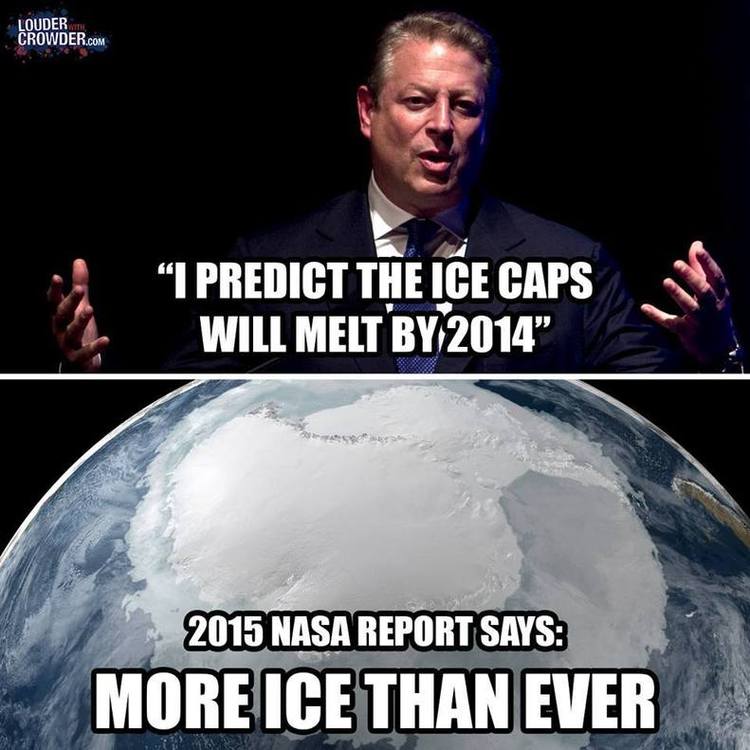 We recently reported here about how the Obama Administration is hiding the truth about global temperatures in an effort to push ahead with Obama’s radical “Climate Change/Global Warming” agenda.

But, even though NOAA is willing to go along with Obama’s fraud and deception, apparently one other government agency still cares about the truth somewhat.

In 2013, the Intergovernmental Panel on Climate Change said the Antarctic ice sheet had lost large amounts of mass with little or no gain, but new NASA studies say the opposite.
A new analysis of satellite data shows a net gain of 112 billion tons of ice a year from 1992 to 2001, according to ScienceDaily.com. The gain slowed to 82 billion tons per year between 2003 and 2008.

This is very telling considering all the hype about “Global Warming” coming from everyone from Obama to the Pope to Hollywood.  They either are lying themselves or are very gullible in who they believe.

Zwally added that “Antarctica is not currently contributing to sea level rise, but is taking 0.23 millimeters per year away.”

But, he added that if sea levels are rising 0.27 millimeters a year worldwide and the water is not coming from Antarctic ice melt, it has to be coming from somewhere else that “is not accounted for.”

So, if sea levels are rising a tiny, tiny bit each year, and it isn’t melting ice that’s causing it, it must becoming from some other source or the figures are wrong to begin with.

This report has come out shortly after a group of French mathematicians also blasted the phony scam of “Global Warming.” CNS Newshas that story:

As the United Nations gears up for its next international conference on climate change in Paris next month (COP 21), a scathing white paper released by a society of French mathematicians calls its fight against global warming “absurd” and “a costly and pointless crusade”.

“You would probably have to go quite a long way back in human…history to find [such a] mad obsession,” according to a translated summary of the document released in September by the Paris-based Société de Calcul Mathématique SA.

The mathematicians harshly criticized a “crusade [that] has invaded every area of activity and everyone’s thinking,” noting that “the battle [against] CO2 has become a national priority.

“How have we reached this point in a country that claims to be rational?” they ask, adding that mathematicians “do not believe in crusades. They look at facts, figures, comments and arguments.”

“There is not a single fact, figure…[or] observation that leads us to conclude the world’s climate is in any way ‘disturbed,” the paper states. “It is variable, as it has always been. … Modern methods are far from being able to accurately measure the planet’s overall temperature even today, so measurements made 50 or 100 years ago are even less reliable.”

Noting that concentrations of carbon dioxide (CO2) have “always” varied, the French mathematicians also said that after processing the raw data on hurricanes themselves, they verified that “they are no more frequent now than they have been in the past.”

At some point, someone is going to have to be brave enough to admit the scam and divest all financial interests from this lunacy designed to destroy American freedom and world-wide capitalism and nothing more.

“We are being told that a temperature increase of more than 2 degrees C[elsius] by comparison with the beginning of the industrial age would have dramatic consequences and absolutely has to be prevented.

“When they hear this, people worry. Has there not already been an increase of 1.9 degrees C?

“Actually, no. The figures for the period 1995-2015 show an upward trend of about 1 degree C every hundred years! Of course, these figures, [which] contradict public policies, are never brought to public attention,” the white paper stated.

The French mathematicians also said that the UN’s climate models have failed to take into account natural phenomena that affects climate far more than human activity.

Human impact on the climate is “tiny, quite negligible in comparison with natural causes,” they point out. “Human beings can do nothing about solar activity, the state of the oceans, the temperature of the Earth’s magna, or the composition of the atmosphere.”

Furthermore, the work done by the UN’s Intergovernmental Panel on Climate Change (IPCC) does not meet the basic standards set by reputable scientific journals because its “conclusions go [contrary] to observed facts; the figures used are deliberately chosen to support its conclusions (with no regard for the most basic scientific honesty); and the variability of natural phenomena is passed over without comment.”

Truth is the ally of those who seek it.  It is the enemy of all oppressors and tyrants.

Hopefully, someday all this “Climate Change” nonsense will be a mere foolish footnote in the history of humanity.