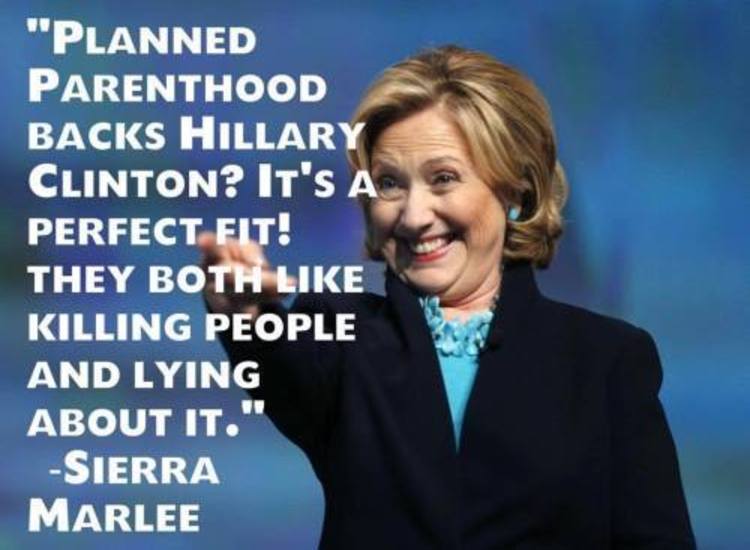 It is no huge surprise that Planned Parenthood – the nation’s largest abortionist and dead baby organ trafficker – is supporting Hillary Clinton for President.

Hillary has always been a loyal soldier in the destruction of unwanted babies.

But, despite being kindred spirits, Planned Parenthood has decided to take things to the next level this election in their support of Hillary.

At a Sunday rally in Manchester, New Hampshire, Hillary Clinton officially accepted Planned Parenthood’s endorsement in her bid for the Democratic ticket in the 2016 presidential election — to energize her base in the name of women’s “reproductive rights.”

This move is unprecedented, making it the first time the world’s largest abortion provider has ever endorsed a presidential primary candidate — with both sides looking to profit.

For Clinton’s unwavering support, the Planned Parenthood Action Fund declared that it will spend $20 million toward her campaign for president, with a focus on battleground states in the U.S. Senate race, LifeSiteNews reports.

So, Planned Parenthood has decided to go “all in” with Hillary by not only officially endorsing her, but also providing her campaign with big bucks.

It is not known at this time how much of the $20 million is actually coming from U.S. taxpayers; given the fact that we are currently bankrolling Planned Parenthood’s killing operation to the tune of over $500 million a year.

But, just like with anything the Clintons and their allies do, rules and laws don’t matter.

One News Now has more:

This opinion that Clinton would supplant Obama as the most pro-abortion president in history also holds true for Planned Parenthood.

“We’re proud to endorse Hillary Clinton for President of the United States,” Planned Parenthood Action announced in a statement. “Hillary Clinton holds the strongest record on reproductive rights of all presidential contenders in not just this election, but in American history.”

Besides Planned Parenthood, Clinton is also endorsed by the NARAL Pro-Choice America political activist group, which appreciates the fact that she supports taxpayer-funded abortion-on-demand, as does Sanders.

To these abortion groups, it is obvious that they view Hillary as “the angel of death” when it comes to protecting their murder operations.

If Hillary gets elected President, she will increase their funding and put a stop to these pesky revelations about them selling dead baby body parts to the highest bidders.

No wonder they want to give her truckloads  of money!

Planned Parenthood CEO Cecile Richards drew the line between Republicans and Democrats in the 2016 presidential election, as well, noting that the future of abortion is at stake.

“Everything Planned Parenthood has believed in and fought for over the past 100 years is on the ballot,” Richards expressed to the New York Times.

Now, anyone who has followed the Clintons knows that they are basically soulless. Money and power are the only things they hold dear.

Forget common decency for human life, “no interfering lives matter” when it comes to the Clintons’ ambitions.

Maybe Hillary is the perfect “poster girl” for Planned Parenthood – they both have no regard for humanity and the innocent among us.