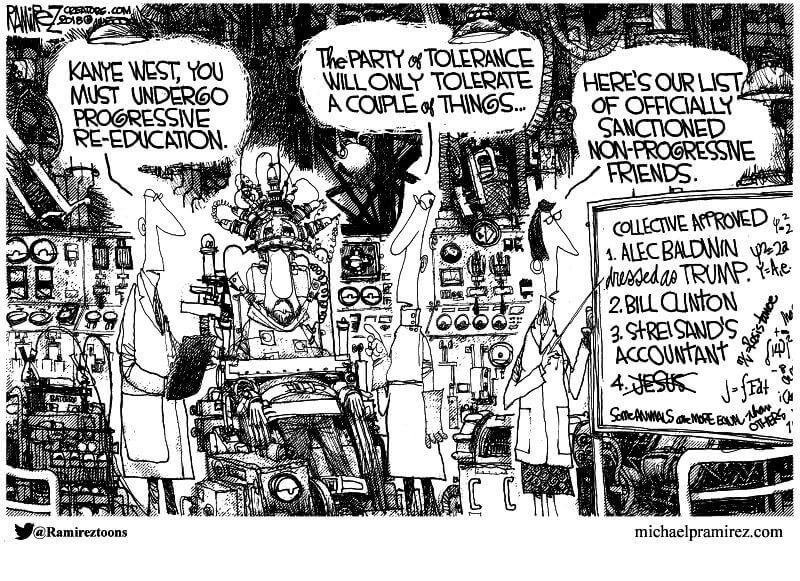 All you need to know about the Democrat party and the Black community summed up by a single cartoon.

No minority is allowed to stray from the Democrat plantation without risking character assassination from the left.

Wendy Williams, 53, is at it again! She roasted Kanye West, 40, for the second day in a row. — This time, focusing on his mental health. “I don’t even know [what his texts] mean,” she said about his recent text exchange with John Legend, 39. The rapper posted private texts with Legend on Twitter, which included the singer’s attempt to let Kanye know the potential consequences of his outspoken tweets. “I’m not even concerned. The bigger concern is this man is now so off the rocker that he’s turning on private texts of his,” Wendy clapped back. “And, if I were a friend of his, I’d be like, ‘Oh snap.’ You can’t text him, you can’t email him. He’s turning on everyone and he’s obviously not in his mental way.” Wendy then begged her team not to talk about Kanye “for another three days.”

During yet another Kanye-esque Twitter rant on April 26, where he tweeted more than 80 times that day, he posted his conversation with Legend. “Hey it’s JL. I hope you’ll reconsider aligning yourself with Trump,” Legend said. He continued: “You’re way too powerful and influential to endorse who he is and what he stands for. As you know, what you say really means something to your fans. They are loyal to you and respect your opinion. So many people who love you feel so betrayed right now because they know the harm that Trump’s policies cause, especially to people of color,” he told the musician. “Don’t let this be part of your legacy. You’re the greatest artist of our generation.” In response, an unapologetic West said, “I love you John and I appreciate your thoughts. You bringing up my fans or my legacy is a tactic based on fear used to manipulate my free thought.”


Ye then replied, “I tweeted the John text to show that there are people around me that disagree with me and voice their opinion.” He went on to say, “I respect everyone’s opinion but I stand my ground.” In a follow-up tweet, he argued, “If you feel something don’t let peer pressure manipulate you.” Ye confirmed that he loves John, who is signed to his label, Good Music. However, the entire exchange was just awkward.

On the same day Ye posted the texts, Wendy attacked him for an apparent weight gain after the rapper was spotted looking a bit fuller, according to fans. Wendy called Kanye a “mess” who has “fatty knock knees” and needs a “breast reduction.” She also compared him to Rob Kardashian, 31, who’s been struggling with his weight for years. Wendy also added that she believes he “needs help” mentally.

While Kanye West is hardly a model of conservatism or anyone that should be looked up to, it is interesting to see how hysterical the left has become over his support for President Trump.

Perhaps they’re afraid the black community, especially young people, will see how the Democrat party has worked to keep them, and other communities of color, down and under their political control.

Wake up people! The Democrats only care about power and control and NOT freedom or prosperity.