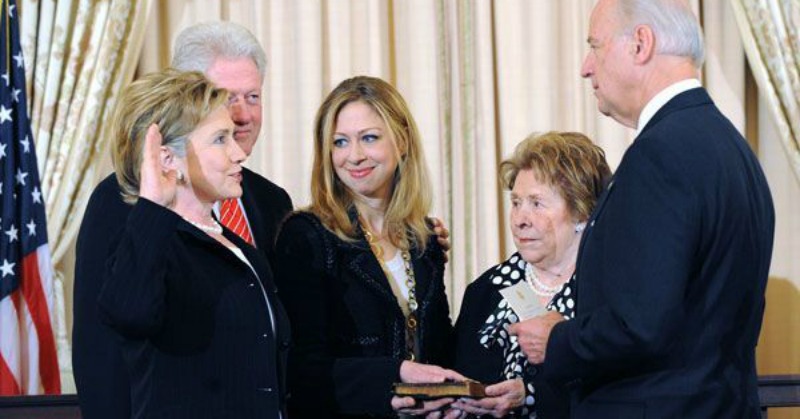 Most of us know by now that The Clinton Foundation is nothing more than a slush fund for the Clinton family to launder the dirty money they received via their pay-to-play scheme during Democrat nominee Hillary Clinton’s tenure as secretary of state; however, their charitable grant records prove that they aren’t even trying to hide it.

The Federalist reported that in 2014, according to IRS documents filed by the Clinton Foundation in 2015, less than six percent of the foundation’s budget actually went to charitable grants.

The Clinton Foundation, which is tax-exempt, spent $91.2 million in the 2014 tax year but just 5.7 percent of that total actually went to charity — less than $5.2 million.

In a convenient scheme, the foundation gave its largest donation, $2 million, to the Alliance for a Healthier Generation (AHG), which was a collaboration between the Clinton Foundation and the American Heart Association.

In true Clinton fashion, the board chairman for the Clinton Foundation in 2014, Bruce Lindsey, was also on the board for AHG, according to the organization’s 2014 tax filings.

Those who defend the indefensible Clinton Foundation absurdly allege that most of the foundation’s good works are done by salaried employees and that the amount of money they give in charitable grants doesn’t really matter.

Did that make sense to you? Me neither… What that excuse sounded like to me was more akin to a celebrity that whines that they don’t have to actually give their money because their time is so much more important.

That’s about right for the Clinton Foundation, as they gave $700,000 to J/P Haitian Relief Organization, founded by uber-liberal actor Sean Penn. The non-profit reportedly made sure to spend more than $126,000 on first-class flights for Penn, who surely could have funded his own travel…

As far as the excuses go, they don’t fly. The Federalist reported:

The Federalist pointed out that the Clinton Global Initiative “exists to organize and produce a lavish annual meeting headlined by former president Bill Clinton,” and was described by the New York Times as a “glitzy annual gathering of chief executives, heads of state, and celebrities.”

A former top Clinton Foundation executive, Ira Magaziner, told the Atlantic in 2007, according to The Federalist, of the group’s so-called climate change activities: “This is not charity. The whole thing is bankable. It’s a commercial proposition.”