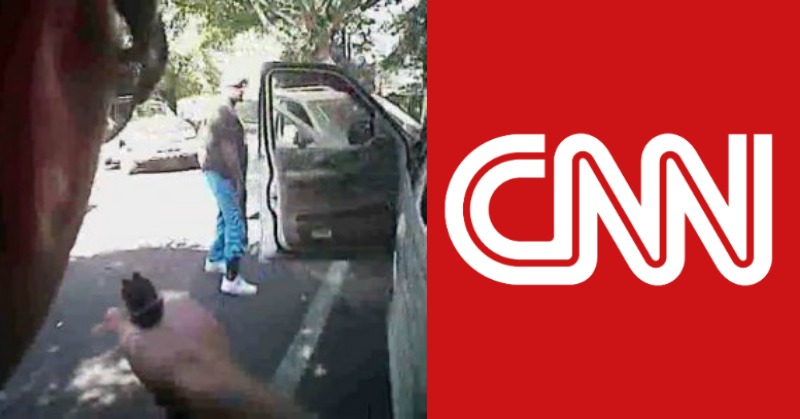 The media ran, as they usually do, with a false narrative after Keith Scott, a black man, was killed on Sept. 20 by a black police officer. Blue Lives Matter, a police group, has called out CNN for allegedly editing the shooting footage to fuel their anti-police agenda.

The narrative pushed by the media in the beginning was that Scott was unarmed (false) and sitting quietly reading a book (false) when he was shot by officers. Blue Lives Matter alleged that CNN helped this along when they edited out “drop the gun” from the video footage of the shooting.

Blue Lives Matter, which consists of active or retired law enforcement officers, released a statement about their allegations against CNN:

The editing was clearly intended to give viewers the impression that Scott wasn’t armed. By intentionally excluding information to promote the false narrative that the officer-involved shooting of Keith Scott was unjustified, CNN directly contributed towards inciting violence and destruction in the Charlotte riots.

The statement continued: “Innocent citizens were hurt during the Charlotte riots, but editing like this also incites violence against police officers long after the riots are over.”

Scott’s widow, Rakeyia Scott, claimed in the video she took of the incident that her husband didn’t have a weapon. Police video told a much different story.

In the video released by the police, an officer can be heard shouting, “Gun. Gun. Drop the gun.” Scott can also be seen wearing an ankle holster, which officers later confirmed. Officers can be seen crouched with their weapons drawn as Scott emerged from the vehicle and backed away from the police.

According to the police, Scott was not “reading a book” as his widow alleged and the media ran with reckless abandon without proof, but was actually rolling a joint. Officers also recovered a stolen, loaded gun at the scene.

Rakeyia Scott yelled, “Don’t shoot him, don’t shoot him,” and “He didn’t do anything,” as police yelled for Keith Scott to drop his weapon twelve times in 38 seconds, according to Fox News.

Blue Lives Matter added, “There are consequences to editing video like this, and it may cost more officers their lives.”

CNN has a history of selective edits. After Sylville Smith, a black man, was killed by a black officer in Milwaukee, his sister Sherelle was on video calling for protesters to stop the violence in the city and take it to the suburbs. CNN kept the part about ending violence in the city, but cut the part about taking the violence and lawlessness out to the suburbs.

Blue Lives Matter is absolutely right: police officers and the public will face undeserved consequences thanks to CNN and other liberal outlets — as well as the violent, lawless individuals who are just waiting for an excuse to behave like animals — but the sad part is that those who should be held responsible likely never will be.