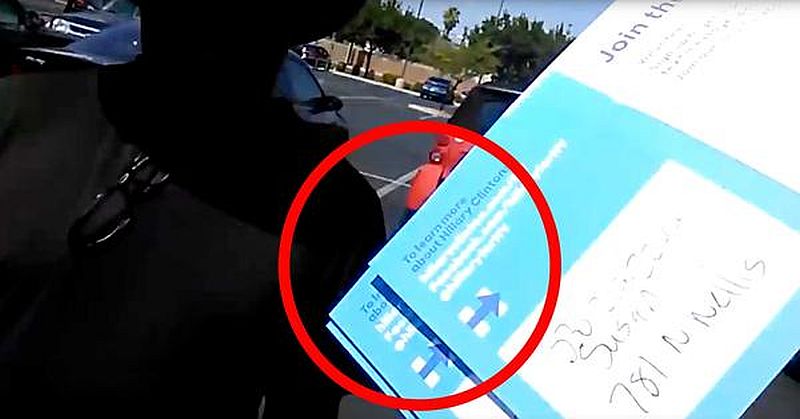 Just this weekend, TFFP reported that Governor Terry McAuliffe of Virginia announced that he would restore voting rights for 13,000 convicted felons. This, as we at TFFP can see, is an obvious attempt to gather more Hillary voters.

It should come as no surprise then that Hillary Clinton campaign workers are committing voter fraud as well! With undisputed evidence on camera.

From the video shared by www.conservativeoutfitters.com, this campaign worker is violating Nevada State Code NRS 293.5045 b which states that no voter registration agent should “display a political preference or party allegiance in a place where it can be seen by an applicant.”

The Nevada state statute regarding voter registration has the following requirements:

1. A person who works in a voter registration agency shall not:

(a) Seek to influence an applicant’s political preference or party registration;

(b) Display a political preference or party allegiance in a place where it can be seen by an applicant;

(c) Make any statement or take any action to discourage an applicant from registering to vote; or

(d) Make any statement or take any action which would lead the applicant to believe that a decision to register to vote has any effect on the availability of any services or benefits provided by the State or Federal Government.

1. A person who violates any of the provisions of subsection 1 is guilty of a category E felony and shall be punished as provided in NRS 193.130.

Watch the video evidence below:

The video clearly shows the campaign worker displaying an anti-Trump sign on the back of her clipboard and passing out pamphlets for Hillary Clinton.

When approached, the befuddled woman just kept repeating, “I have a job and work for the Democratic Party of Nevada”–never even knowing that voter registration activity is to be non partisan.

But that’s what Hillary Clinton must to resort to–garnering votes from convicted felons and employing ignorant registrants.