A report from the Employment Policies Institute revealed that 174 of the liberal legislators who co-sponsored a bill to raise the federal minimum wage to $15/hour don’t even pay their own interns that much.

If fact, all 174 legislators pay their interns nothing, aka zero, aka zilch.

But it gets worse.

“Of those that do offer a stipend, Senator Bernie Sanders is the only member who pays an hourly wage,” noted the institute, before adding that he only pays his interns $12 an hour, which is $3 short of the $15 he demands of the private sector.

Yet on the Vermont senator’s website, he claims that we the American people “must ensure that no full-time worker lives in poverty.”

“The current federal minimum wage is starvation pay and must become a living wage,” he says. “We must increase it to $15 an hour over the next several years.”

Except for yourself, right? You’re special, right, pumpkin?

Apply to be an intern in Sen. Sanders’ office this fall. The deadline to apply is Friday, June 23. https://t.co/EPSZUJsFvB

But how are your interns supposed to live at only $12/hour, Bernie? You yourself have stated countless times that any wage under $15 is simply not enough to survive.

In fact, his interns “could work 40 hours a week and still be ‘living in poverty,'” according to the Washington Free Beacon.

And oh, did I mention that during the election last year Sanders criticized Hillary Clinton for wanting to raise the minimum wage to just $12 an hour?

“You have no disposable income when you are making 10, 12 bucks an hour,” he said during a debate.

I guess it doesn’t matter though when YOU are the one doling out the checks, right, Bernie? 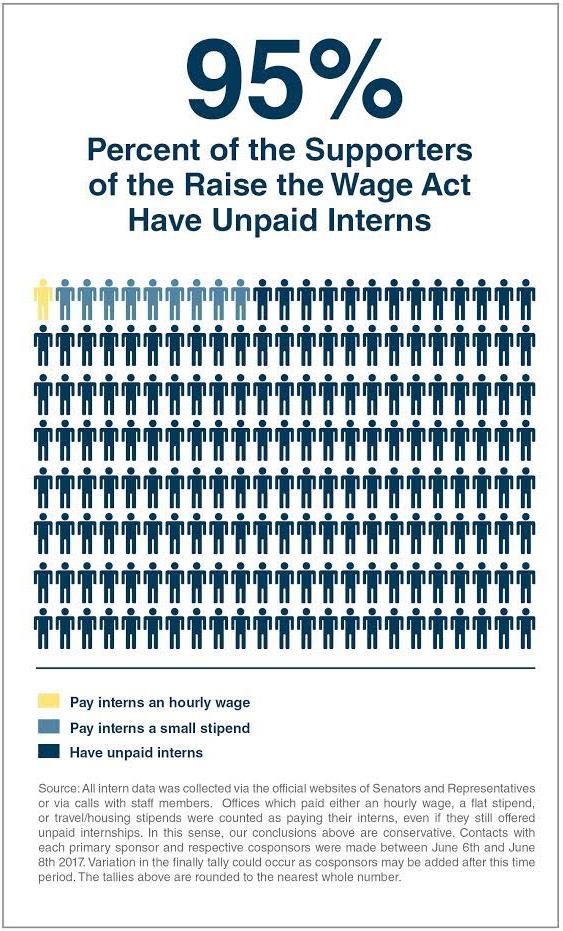 To be fair, Bernie isn’t the only hypocrite in the political world. Besides the 174 legislators who pay their interns nothing, there’s also former President Barack Obama.

Hot Air noted that though Obama decided to wage “a war over the use of interns, arguing that for-profit corporations offering spaces for interns are really attempting to avoid minimum-wage laws,” he had no qualms about using interns at his Organizing for America group.

There’s nothing inherently wrong with arguing for a higher minimum wage. Mind you, most conservatives rightly oppose such measures because they recognize the economic repercussions that would result.

That being said, there is something very twisted and outright wicked about a human being who in one breath argues for a higher minimum wage, but who in the other pays his or her own subordinates jack diddly.

There’s a word for such despicable behavior: Hypocrisy.