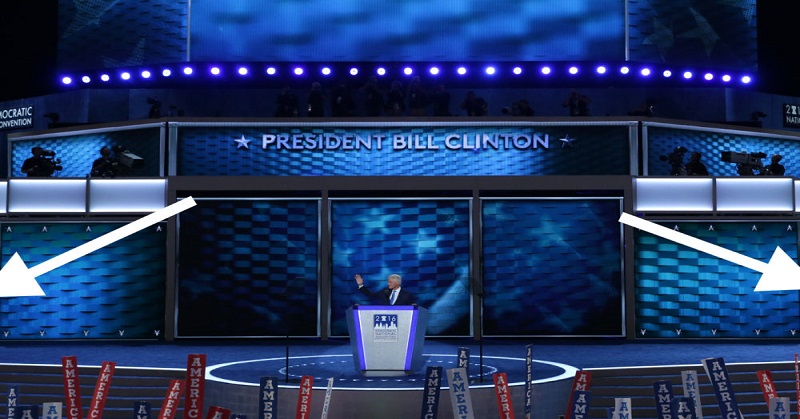 The supposedly “fair” and “nonpartisan” myth-busting website Snopes has been caught carrying water for the Democratic Party … again.

When the Daily Caller – and many other news outlets – reported that the Democratic Convention in Philadelphia was noticeably short of flags, Snopes freaked out and accused the Daily Caller of lying.

The biggest problem with this is that Politifact – a Pulitzer Prize-winning website confirmed that there were no flags on stage on the Dems’ first night. Here’s how the Daily Caller reports it:

First, the facts. TheDC reported on Monday about the lack of visible American flags at day one of the convention. Several flags were briefly on stage for the national anthem and pledge of allegiance, at which point they were carried off stage, as the C-SPAN video for Monday clearly shows at the 35:40 mark. Even PolitiFact, which tends to lean to the left, noted that “when the color guard left, so did the physical flag.” After that point, the stage was devoid of any American flags for the remainder of day one.

As reported by TheDC, the DNC added flags to the stage for the second day of the convention — Tuesday, July 26. That same day, Snopes writer Dan Evon wrote a “fact-check” article declaring it “false” that: “No American flags were on display at the 2016 Democratic National Convention.”

Evon offered as proof A) a screenshot from PBS’ coverage of day one, taken during the pledge of allegiance — before the flags were removed — and B) the below screenshot of C-SPAN’s day two coverage (visible at the 6:36 mark here) and claimed it was from day one of the convention. In fact, Mallory Weggemann — the Paralympic swimmer who gave Tuesday’s pledge of allegiance — can be seen sitting in her wheelchair as the flag-bearers walk past her.

There are a lot of allegations being thrown back and forth between Snopes and the Daily Caller. Late Wednesday afternoon, Snopes released yet another article with a picture of a crying baby, saying TheDC was having a “hissy fit.” They spent most of the article throwing cute insults at TheDC, like a schoolyard bully.

Folks: I wasn’t there. Snopes.com wasn’t there. The Daily Caller says they were there on the floor of the convention and the Pulitzer Prize-winning Politifact sides with TheDC.

So that’s where I’ll fall, thank you very much.

Snopes is great for debunking myths about the Loch Ness Monster and Jaden Smith, but they fall short when they venture into the deep end of the pool and think they can play with the big boys.

There be sharks in them waters.