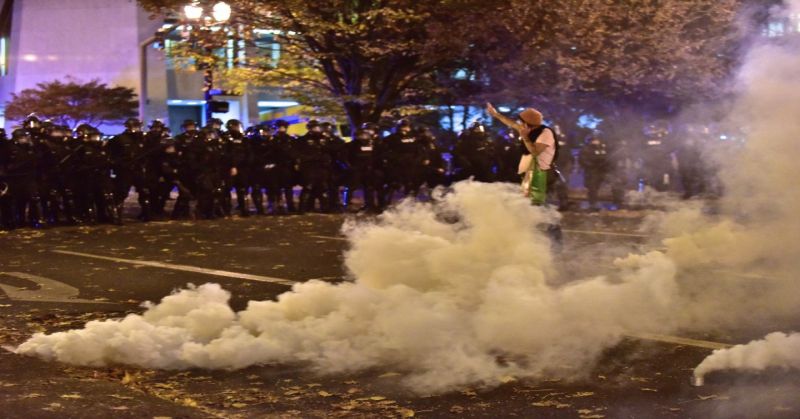 Left-wing hysteria is in full “red alert” mode as people react to – and try to incite violence against – the election of Donald Trump as president.

Perhaps no one is more hysterical than the racial and religious leaders who are either predicting a new “race war” or some sort of “purge” against Muslims in America.

Of course, none of this is going to happen, but they seem to prognosticate it as if they were hoping for it.

As an example, take a look at a tweet election night from Hussam Ayloush, he’s the Los Angeles head of the Council on America Islamic Relations (CAIR):

It was a slogan first used during the Tunisian revolution, which kicked off the Arab Spring, where dozens of totalitarian Islamic nations were either toppled or faced serious street demonstrations. It was also the slogan during the overthrow of Egyptian leader Hosni Mubarak.

Ayloush is not just a nominal figure in Leftist circles. In 2012, he was a delegate to the Democratic National Convention and has attended at least two White House meetings, Daniel Pipes is reporting.

The [White House] logs show Ayloush met with Paul Monteiro, associate director of the White House Office of Public Engagement on July 8, 2011 and Amanda Brown, assistant to the White House director of political affairs Patrick Gaspard, on June 6, 2009. According to reliable sources, Monteiro was White House liaison for secret contacts with CAIR, especially with Ayloush.

For the record, advocating the overthrow of the U.S. Government is an extremely serious crime. In 18 U.S. Code § 2385, it reads:

“Whoever knowingly or willfully advocates, abets, advises, or teaches the duty, necessity, desirability, or propriety of overthrowing or destroying the government of the United States… Shall be fined under this title or imprisoned not more than twenty years, or both.”

Ayloush has since said the tweet was some sort of an inside joke that only Muslims could get.

@jakeedmonds13 have you ever heard of political satire?

@jakeedmonds13 actually, those who speak Arabic found it really funny. Maybe u need to learn Arabic.

“As citizens of this great nation, we accept the result of the democratic process that has bound us together as one nation,” he said, The Daily Caller is reporting.

“Regardless of who won or lost yesterday’s election, American Muslims are here to stay. We are not going anywhere, and will not be intimidated or marginalized. God willing, the American Muslim community will continue to mobilize to challenge bigotry, to uphold justice and to protect the freedoms and rights of all Americans. American Muslims will also increase outreach to their fellow citizens of other faiths and backgrounds to build bridges of mutual understanding and cooperation.”

“We will hold the new president to the highest standard in defending the rights of all those residing in our nation, as guaranteed by the Constitution,” Awad continued.