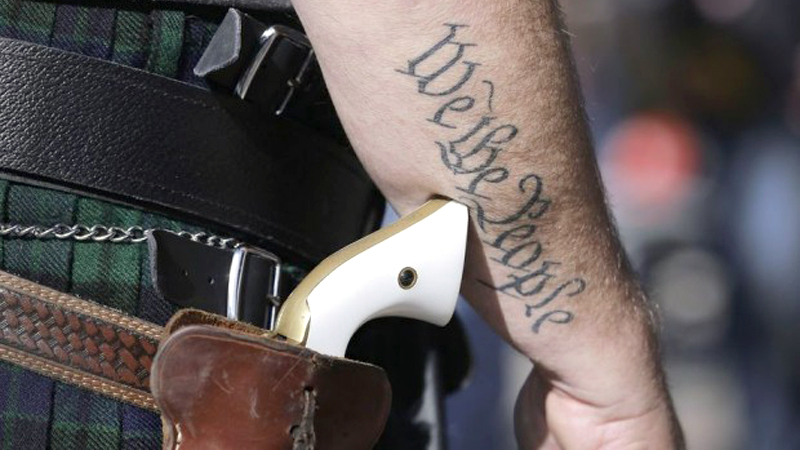 The Democrat controlled California legislature is pushing through a slew of anti-Second Amendment gun bills that critics say will do nothing to stop crime and will only serve to turn lawful gun owners into criminals. There are so many bills, and they are so restrictive, supporters of the Second Amendment are calling the push “Gun-Mageddon.”

The seven new bills are set to outlaw a list of guns and gun features that up to now have never been considered a threat by anyone in the liberal, gun-averse legislature and, according to detractors of the laws, in some cases even represent unconstitutional bans and illegal confiscations of completely legal firearms.

In opposition to the bills, Republican State Sen. John Moorlach said, “Today we want to make criminals out of law-abiding citizens who have been collecting guns.”

But in a state legislature filled to overflowing with extreme liberals who face no opposition from the Golden State’s weak Republican Party, it seems that the complaints of legal gun owners and those concerned with the U.S. Constitution will make no difference. The seven bills are now headed to the appropriations committee to determine costs as the next step in their inevitable passage.

The Sacramento Bee outlined five of the bills.

Another one of the bills would set up a new agency called the “Firearm Violence Research Center,” which critics say will just be another bottomless pit of tax money that will do little to help solve gun violence, crime, or terrorism. But worse than just a waste of money, many expect this new “research center” to lead to ammunition bans, ammunition registries and tracking — all efforts to make guns useless by putting so many restrictions on ammunition that it can’t be gotten by honest citizens.

And on that last point, it is important to note that Thomas Jefferson essentially commented on something like an ammunition ban that would make guns useless. In Jefferson’s reckoning, banning ammunition or restricting it so much that it is impossible to purchase by legal means would be a violation of the Second Amendment. Jefferson noted this in his “Report on Navigation of the Mississippi.”

“It is a principle that the right to a thing gives a right to the means without which it could not be used, that is to say, that the means follow their end,” Jefferson wrote.

In other words, you can’t take ammunition away and claim you aren’t canceling the Second Amendment because without ammunition you can’t use a gun.