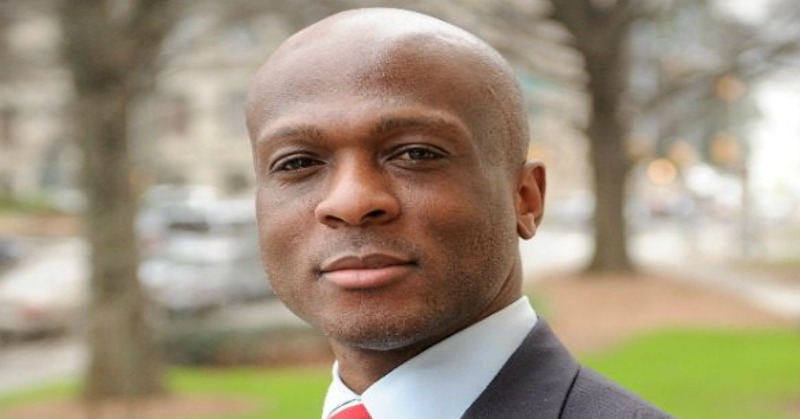 Vincent Tolliver was expelled from the race for DNC chair by interim chairwoman Donna Brazile for… standing up for gay people?

Tolliver, who ran an unsuccessful campaign for the Arkansas Congress, told The Hill that he didn’t think Rep. Keith Ellison (D-Minn) should be the chairman because of Islam’s opinion toward homosexuals.

“His being a Muslim is precisely why DNC voters should not vote for him,” Tolliver said. “Muslims discriminate against gays. Islamic law is clear on the subject, and being gay is a direct violation of it. In some Muslim countries, being gay is a crime punishable by death.”

“Clearly, Mr. Ellison is not the person to lead the DNC or any other organization committed to not discriminating based on gender identity or sexual orientation,” he continued. “I’m shocked [the Human Rights Campaign] has been silent on the issue. A vote for Representative Ellison by any member of the DNC would be divisive and unconscionable, not to mention counterproductive to the immediate and necessary steps of rebuilding the Democratic Party.”

Brazile called his comments “disgusting” and promptly expelled him from the race.

In a statement to Breitbart, Tolliver confirmed that he plans to take legal action against the DNC for violating his rights under the First Amendment.

“The DNC and the Democratic establishment are attempting to prevent me from freely expressing known and indisputable tenets of Islamic law. Moreover, through sleight of hand tactics, interim chair Donna Brazile falsely accused me of discriminating against Mr. Ellison and cast aspersions by suggesting I was intolerant of religious freedom,” he alleged.

“Furthermore, the DNC’s blocking my candidacy is a glaring contradiction to the 2016 Democratic Platform, that ‘as Democrats, we respect differences of perspective and belief, and pledge to work together to move this country forward, even when we disagree.’ I am a lifelong Democratic who believes in people and not power and elitism which has successfully corrupted the DNC and the Democratic Party,” he continued.

I don’t care if he’s a Democrat, he has as much right to voice the truth as anyone else. I absolutely stand with Mr. Tolliver.

This is also evidence that liberal Democrats are choosing Muslims of homosexuals and trans people. Remember that next time they try to march for the rights of these people; they’re willing to hand them over to people who want them dead.