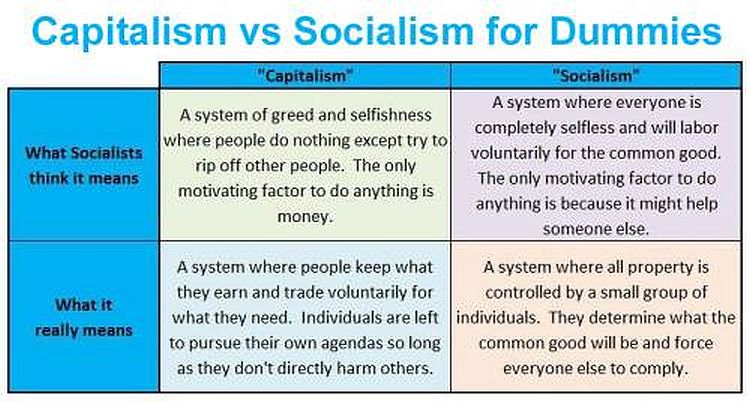 Townhall shares 7 reasons socialism will make you poorer than capitalism:

1) Socialism benefits the few at the expense of the many: Socialism is superior to capitalism in one primary way: It offers more security. It’s almost like an extremely expensive insurance policy that dramatically cuts into your quality of life, but insures that if worse comes to worse, you won’t drop below a very minimal lifestyle. For the vast majority of people, this would be a terrible deal. On the other hand, if you’re lazy, completely incompetent or alternately, just have a streak of very bad luck, the meager benefits provided by socialism may be very appealing. So a socialist society forces the many to suffer in order to make it easier for the few. It’s just as

Winston Churchill once noted, “The inherent virtue of socialism is the equal sharing of miseries.”

2) Capitalism encourages entrepreneurship while socialism discourages it: A government in a capitalist economy can quite easily give everyone equality of opportunity with a few basic laws and regulations, but socialism strives to create equality of results. This should frighten people who value their freedom because ultimately, as F.A. Hayek has noted, “A claim for equality of material position can be met only by a government with totalitarian powers.” You can see this happening in America as our efforts to reduce “inequality” have led to an ever expanding government and a vast regulatory tangle that is almost unexplainable despite the fact that it is certainly enforceable. Capitalism encourages people to start a business and build a better life for themselves while socialism lays in wait with IRS agents, nooses made of red tape and meddling bureaucrats looking for businesses to control and loot.

3) Capitalism leads to innovation: Coming up with new products is often time consuming, expensive and hit or miss. Nine ideas may fail before that tenth one takes off. The less the creative people behind these ideas are allowed to benefit, the less time, money and effort they’ll put into developing new concepts and inventions. Put another way, the bigger the risk, the bigger the reward has to be to convince people to take it. Capitalism offers big rewards for productive people while socialism offers makers only a parade of bureaucratic leeches who want to take advantage of their “good fortune.”

4) Capitalism produces more economic growth: Capitalism produces considerably more economic growth than socialism and as John Kennedy said, “A rising tide lifts all boats.” A fast growing economy produces more jobs, more wealth and helps everyone. Many people assume that capitalism isn’t working if there are still poor people, but that misses the point. In many parts of the world, poverty means living in a hut with a dirt floor while in America, most poor Americans have TVs, refrigerators and cell phones. The rich may take home a larger share of the pie in capitalism, but the poor also benefit tremendously from living in a growing, thriving economy.

5) Socialism is too slow to adapt: Capitalism is extremely good at allocating capital to where it’s most valued. It has to be. Either you give people what they are willing to pay for or someone else will. On the other hand, socialism is slow and stupid for a variety of reasons. Because the government is spending someone else’s money, it doesn’t get particularly concerned about losing money. Political concerns about appearances often trump the effectiveness of a program. Moreover, even if politicians and bureaucrats are intelligent and competent, which are big “ifs,” they’re simply not going to have the specific knowledge needed to make decisions that may impact thousands of different industries. This is why capitalism may have its share of troubles, but when there are really colossal economic screw-ups, you’ll always find the government neck deep in the whole mess.

6) Socialism is inherently wasteful: Milton Friedman once said, “Nobody spends somebody else’s money as carefully as he spends his own. Nobody uses somebody else’s resources as carefully as he uses his own.” This is very true and it means that the more capital that is taken out of the economy and distributed, the more of it that will be wasted. The market does a considerably better job of allocating resources than the government because there are harsh penalties for failure. A company that makes products no one wants will go out of business. A poorly performing government program that wastes a hundred times more money will probably receive a bigger budget the next year.

7) Capitalism works in concert with human nature while socialism works against it: Ayn Rand said it well, “America’s abundance was created not by public sacrifices to ‘the common good,’ but by the productive genius of free men who pursued their own personal interests and the making of their own private fortunes. They did not starve the people to pay for America’s industrialization. They gave the people better jobs, higher wages and cheaper goods with every new machine they invented, with every scientific discovery or technological advance—and thus the whole country was moving forward and profiting, not suffering, every step of the way,” but Adam Smith said it better, “It is not from the benevolence of the butcher, the brewer, or the baker, that we expect our dinner, but from their regard to their own interest.” A man will work much harder to take care of himself, his family and his friends than he will to make money for the state, which will then waste most of it before redistributing it to people who aren’t working as hard as the man who earned it in the first place.