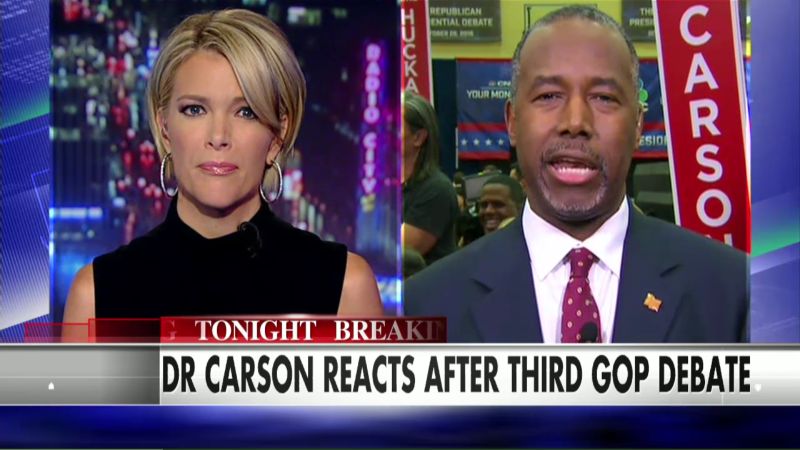 Republican presidential candidate Dr. Ben Carson appeared on Fox’s The Kelly File with Megyn Kelly after the debate on Wednesday night, where the neurosurgeon blasted CNBC’s handling of the debate.

Carson, one of the several GOP candidates who pushed back against debate moderators last night, said he is “sick and tired” of media bias.

“Well, I think that they obviously had an agenda, and when I compare them to the kind of questions that were asked of the Democrats in their debate, the difference is night and day.

But the thing that was really encouraging to me is that the audience was able to pick up on the bias, and they were able to act accordingly, and I hope some of the media is starting to recognize this, because, as you know, I have been quite critical of the media.

They have their own agenda. They try to formulate the opinions of the people, and I think that people are getting a little sick and tired of it. I know I am,” Carson told Kelly.

Carson criticized CNBC, which he called “an obscure network,” questioning even the scheduling of the event.

“I’m not sure that that many people watched the debate. I mean, it’s on against the World Series, and it’s on an obscure network. So, I mean, good luck with that.”

Moderators from the debate received wide criticism for asking leading questions which were usually framed against core Republican ideals. The moderation was clearly biased, and nearly all the candidates had to push back and assert themselves over the moderators at one point.

Carson was pushed on his tax plan, which the moderator asserted false statements about. Carson, who many see as docile, surprised onlookers as he pushed back and defended the merits of his plan.

The Republican presidential hopeful was also asked a pointed question which attempted to paint him as anti-gay for his support of religious liberty. Carson derided the premise of the question and got loud applause when he stated that the people who use issues to divide Americans were the true enemies.

Carson concluded onThe Kelly File that the debate was “a gotcha set up, you know, each question that they asked, and I was glad that Senator Cruz called them out on it, on what they were doing. It didn’t change what they were doing, because they had [a] preset agenda. But nevertheless, it helps the people of America to be able to see what’s going on, and I think that this is going to be critical to what happens in our election next year.

“Will the people actually be able to understand how traditionally they have been manipulated and herded? And will they begin to think for themselves? And of course, Thomas Jefferson was the one who said that they would. He said we’ll reach this point where the government too big, infiltrated and tried to dominate our lives. Here we have the media being complicit with it, but that the people would wake up, recognize what was going on, rise up, and regain control. And I believe that that’s exactly what’s happening now.”