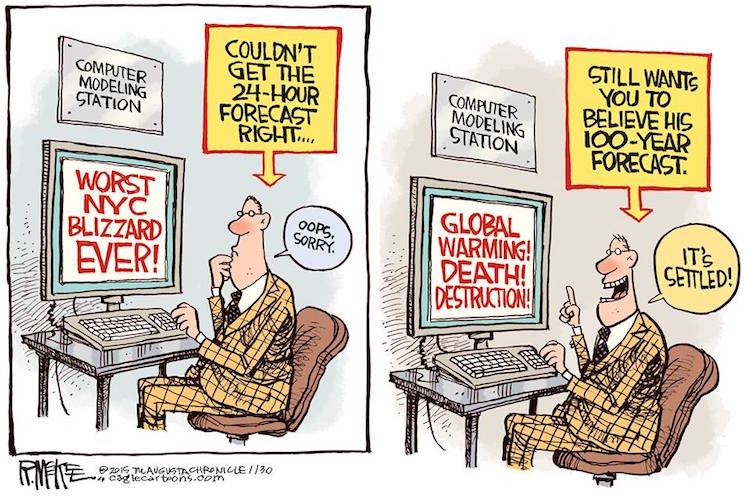 C.E. Dyer reports that Climate Central recently ran an article about “overwhelmingly hot” 2016 temperatures, which the Washington Post greedily lapped up to support their man-made climate change agenda. There’s one big hitch, however, and it lies in evidence that this so-called climate change data has been tampered with to fit the agenda.

Take a look at this excerpt of a post from Climate Central:

According to Climate Central: “Climate change has caused the U.S. average temperature to increase about 1.5° F since the 1880s.” The Deplorable Climate Science Blog broke down why this is incorrect:

The first problem with their analysis is that the US had very little hot weather in 2016. The percentage of hot days was below average, and ranked 80th since 1895. Only 4.4% of days were over 95°F, compared with the long term average of 4.9%. Climate Central is conflating mild temperatures with hot ones.

The NOAA data corroborates the 1.5 degree uptick in temperature, but the problem lies in the faulty data.

According to the DCSB, the warming trend that the climate change crowd is referencing is based on fake data that has been altered from the raw data that does not show such an increase.

Can you guess what the adjustments from the raw data amounted to? Why, that would be 1.5 degrees — the number referenced in the article to bolster the climate change hoax.

The DCSB reported: “The adjustments being correlate almost perfectly with atmospheric CO2. NOAA is adjusting the data to match global warming theory. This is known as PBEM (Policy Based Evidence Making.)”

These adjustments since 1970 have resulted almost entirely from the NOAA that has made up the numbers when station data went missing. In 2016, the NOAA made up an enormous amount of data as more than 42% of their monthly station data was nowhere to be found.

The DCSB pointed out that you can identify this fake temperature data easily as it has an “E” mark in their database.

When presented with my claims of fraud, NOAA typically tries to arm wave it away with these two complaints.

Both claims are easily debunked. The only effect that gridding has is to lower temperatures slightly. The trend of gridded data is almost identical to the trend of un-gridded data.

Time of Observation Bias (TOBS) is a real problem, but is very small. TOBS is based on the idea that if you reset a min/max thermometer too close to the afternoon maximum, you will double count warm temperatures (and vice-versa if thermometer is reset in the morning.) Their claim is that during the hot 1930’s most stations reset their thermometers in the afternoon.

This is easy to test by using only the stations which did not reset their thermometers in the afternoon during the 1930’s. The pattern is almost identical to that of all stations. No warming over the past century. Note that the graph below tends to show too much warming due to morning TOBS.

Even though it’s their own explanation for the data, a quick analysis from the NOAA’s own data shows that TOBS doesn’t explain away their faulty data as the adjustment for TOBS is very small — 0.3 degrees F.

Take a look at what Gavin Schmidt of NASA had to say about the data:

NOAA has known the truth about global warming for some time:

Once again, man-made climate change is shown to be a farce.