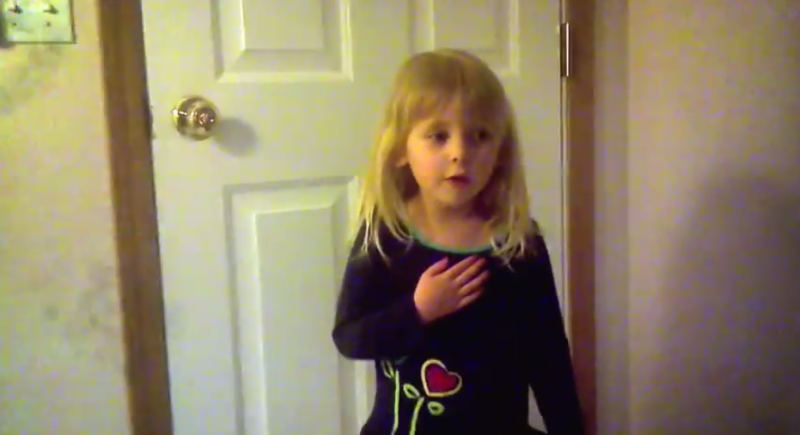 Why is the Pledge of Allegiance too “political” for CBS Sports?

The simple, 30-second commercial was all set to run during CBS Sports’ broadcast of the Wrangler Champions Challenge rodeo.

“We just thought it’s around Sept. 11, Patriot Day, and rodeo is as patriotic a sport as it comes,” Dave Retter told the Tri-City Herald. “We’ve had so many positive responses, we felt it would be fun to run something positive.”

Retter, the owner of a real estate company in eastern Washington, also wanted to add a little local flavor as part of CBS Sports’ rodeo broadcast, which was going to air all the action from the Horse Heaven Round-Up at a fair in nearby Kennewick.

Then the fair director got an email from CBS Sports rejecting the commercial because of its “political nature,” the Herald reported.

Even though the commercial features nothing but Retter’s 4-year-old granddaughter reciting the Pledge of Allegiance.

Watch the ad and see if you can spot anything a regular, sports watching American might find offensive:

Did you think that ad was “too political” as CBS claims? Is the Pledge of Allegiance political, or simply patriotic?

Steve Straub
Steve has been involved in national politics for over 20 years and helps run one of the largest conservative opinion and analysis sites in the country.
Jim Acosta Goes After Kayleigh McEnany on Trump "Lies", Backfires in His Face
Cuomo to Sign Order Authorizing Private Businesses to Deny Entry to Those Who Do Not Wear Masks
Texas Supreme Court Hands Big Win to Trump, Halts Mail-In-Voting Over Fear of Catching Coronavirus
Attorney General Barr Appoints U.S. Attorney to Review ‘Unmasking’ Before and After 2016 Election
Wisconsin Elections Commission Approves Plan to Send Mail-In Ballot Applications to Every Registered Voter
See more...