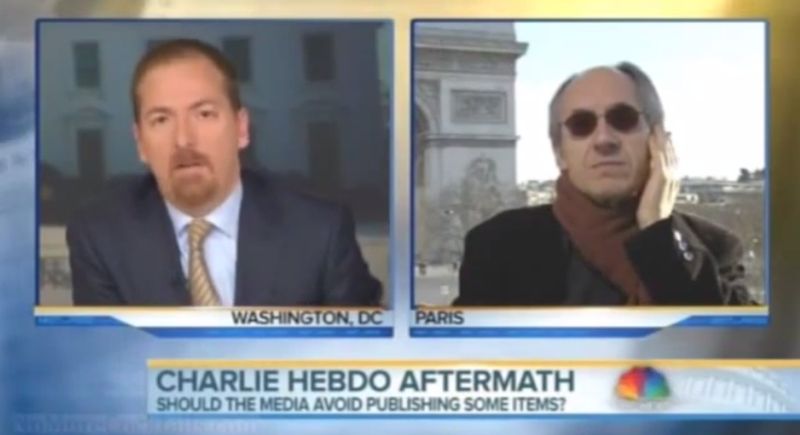 Gérard Biard, editor in chief of Charlie Hebdo, had a lot to say to media outlets that chose not to republish or blurred out the magazine’s controversial cartoons after the terrorist attack last week that left 12 people dead.

Host Chuck Todd told Biard this morning on “Meet the Press” that NBC News made the “editorial decision” not to republish the images. He then asked Biard, “What is your reaction to our decision and others who have chosen not to show your cover?”

Biard through a translator responded:

“Listen, we cannot blame newspapers that already suffer much difficulty in getting published and distributed in totalitarian regimes for not publishing a cartoon which could cause them, at best jail, and at worst, death. On the other hand, I’m quite critical of newspapers which are published in democratic countries.”

He went on to state that the cartoons are a symbol of freedom.

Translation: American media outlets that chose not to republish or blurred out the cartoons are spineless cowards who have all but stomped on the precepts of this great nation, renouncing their fundamental rights to freedom of speech, press, religion and the like over political correctness and fear.

It is a sorry state of affairs for the United States media, “beacons” of the first amendment, to get a well deserved slap in the face and a clearly much needed reminder of what they are supposed to stand for by a French satirical magazine Editor-in-Chief. What do you think?

Elizabeth Allen
Elizabeth has been writing about politics and Christianity, and where the two intersect for almost 10 years.
Whoopi Goldberg Suggests SCOTUS Will Bring Back Slavery: Goes Directly After Clarence Thomas
'Thoughts and Prayers Are Not Going To Do It': Dems Scream for Gun Control After Senseless Tragedies Over Weekend
Steve Forbes on Elon Musk's Intent to Purchase Twitter: 'One Way or Another He Will Get Control'
Alabama Joins Florida, Texas As Governor Signs Two Bills into Law to 'Protect Our Children'
Another Gas Gouge: Thieves Actually Using Power Tools to Drill Holes in Underground Tanks and Cars
See more...