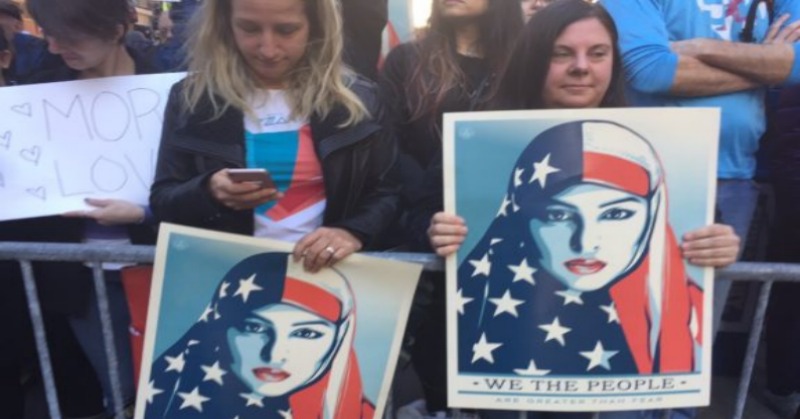 An anti-Trump protest took place in Times Square on Sunday with Muslims and liberals coming together to stand in solidarity against the President’s “Muslim ban.”

The protest included a Muslim call to prayer, and was attended by some big names, including Susan Sarandon and Chelsea Clinton.

The event, called I Am Muslim Too, hosted controversial figure Linda Sarsour.

Some even had signs supporting both feminism and Islam, which is arguably one of the world’s largest oxymorons.

Many supported the idea of covering the Statue of Liberty with a hijab.

NYC Anti-Trump Protestors: "Cover the Statue of Liberty with a Hijab" pic.twitter.com/kuW5VsF3TB

I guess someone forgot to tell them that Islam is a regressive ideology that does not offer women the same freedoms a man has, and is therefore the antithesis of feminism. There’s only one group of people who thinks it’s acceptable to stone women to death for committing “adultery” by being raped.

Of course, Sasour seems to have missed the memo about her religions beliefs, and is trying to convince liberals that Muslims are totally with them.

.@lsarsour is unapologetically Muslim. We are so honored to stand with her today. #IAmAMuslimToo pic.twitter.com/7pNvUU2evg

It’s not surprising that Chelsea Clinton was at the anti-Trump protest, given that her mother lost despite receiving millions from Saudi Arabia, a nation that doesn’t even let women drive.

I guess common sense isn’t a flower that can grow in everyone’s garden.