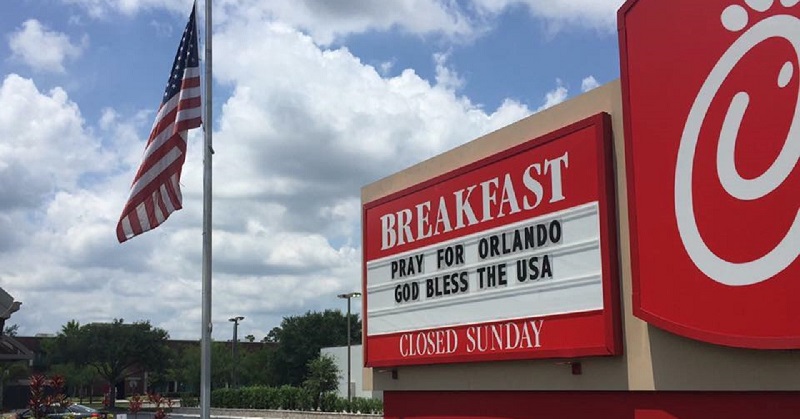 Liberals are fuming that the company they’ve tried to vilify as evil and homophobic is doing something so very Christian.

Chick-fil-A restaurants opened their doors in their Orlando this past Sunday to make food for those who are donating blood to the victims of the recent terrorist attack; the attack at the gay nightclub left 49 dead and 53 injured.

A few members of our awesome team decided to go into work on a Sunday and make some food for people waiting in line to donate blood. We love our city and love the people in our community. #prayfororlando

“A few members of our awesome team decided to go into work on a Sunday and make some food for people waiting in line to donate blood,” the Chick-fil-A in Lee Vista, Florida, wrote on Facebook Sunday. “We love our city and love the people in our community.”

The Christian-owned Atlanta-based chain is famous for being closed on Sunday, but many stores opened up to prepare meals following the attack – providing food and any assistance that was needed.

One Chick-fil-A location posted a photo of their flags at half-staff and the following message to their Facebook page:

“God Bless the USA. Home is where the (heart) is. Orlando is our home. ‪#‎prayfororlando.”

Chick-fil-A employees were seen distributing sandwiches and ice tea to those who waited several hours in line to donate blood, in addition to the hundreds of law enforcement officials who responded to the shooting scene, Fox 5 Atlanta is reporting.

Chick-fil-A is Democrats’ boogeyman after the company’s COO made comments opposing same-sex marriage. Since then, the retail chain has been the subject of boycotts, protests and demonstrations across the country. They have had precisely zero effect on their business, however.