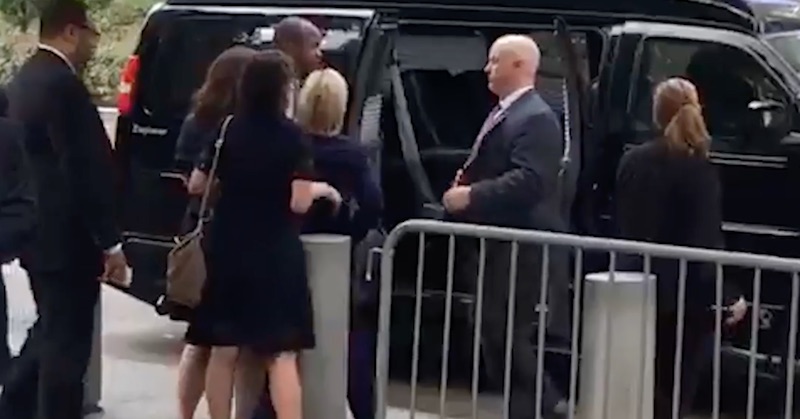 The video of Hillary Clinton’s lifeless body literally being dragged into her van has gone viral – and it’s chilling.

After claiming she suffered from heat exhaustion on a 78-degree morning, Hillary left a 9/11 commemoration ceremony early.

Standing and waiting for the van doors to open, she appeared shaky – out on her feet, really. And when the doors finally open, Clinton totally collapses. Three guards kept her from falling and managed to get her into the van … with her feet dragging behind her.

It took an hour and a half for the Clinton Campaign to even explain what happened.

By then, she had exited Chelsea’s apartment, claiming to feel fine.

This is all simply too much for the mainstream media. Previously, they were happy to discount concerns about her health as part of the “vast, right-wing conspiracy.” But no more. Here is the New York Times’ LA Bureau Chief:

And the Times’ (And MSNBC) political analyst agrees:

In fact, Cillizza wrote Sunday that the “right wing” was correct: Hillary’s health is an issue.

A coughing episode is almost always just a coughing episode. But when coupled with Clinton’s “overheating” on Sunday morning — with temperatures something short of sweltering — Clinton and her team simply need to say something about what happened (and why the press was in the dark for so long.)

So the media now cares about Hillary’s condition. How long will it last? 24 hours? A week?

We can only hope.