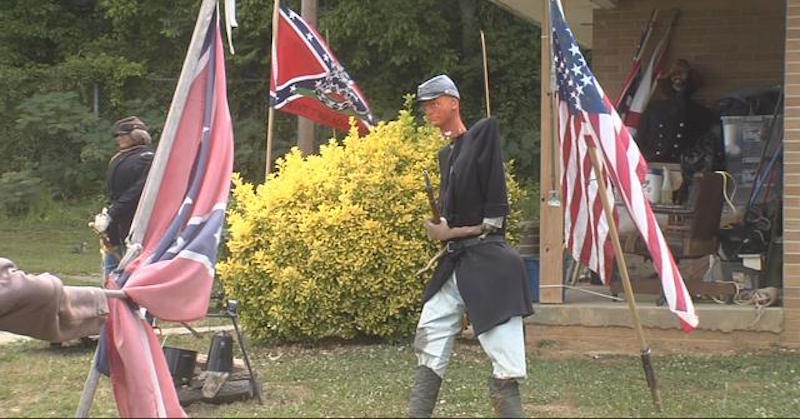 A Georgia man has been told to remove his Civil War Display from his front yard because some people don’t like it.

Lafayette resident Kevin Smith says the city wants him to tear down the life-size display he spent the last three years putting together. It features life-size displays of famous Civil War battles.

He said he has absolutely no plans to take them down.

Each model and flag in the display represents a certain battle. It’s a way of educating his community, Smith says. “Presentation. I tried to put the display around town so tourist can see the history and draw tourism here.”

Last Thursday, however, he got a notice from the city’s Housing Authority saying the display has to go. There were “complaints that there were statues and confederate flags and they would have to go.”

The notice cites complaints from residents, but it doesn’t say who the residents are, WRCBTV is reporting.

The station tried to get the Housing Authority to comment on the matter, but they refused, saying their lawyers told them to keep quiet. A spokesman did say they’re trying to “work things out with Mr. Smith.”

Smith says the Civil War played an important role in US and Walker County history. He doesn’t want those years to be forgotten.  “I am standing my ground. This is a part of our history. It is to educate so we don’t fight another war.”

Smith said he has no plans to remove the display or leave his home. Based on the notice he was provided, it’s not clear when the display must be removed or what action the Housing Authority plans to take if it is not.

Smith believes the First Amendment of the Constitution protects him, but he is open to compromise.

“I am open to relocate, as long as it is safe and it will not be damaged,” Smith said.

What the hell has happened to our country where a private citizen can’t erect whatever they want in their front yard?