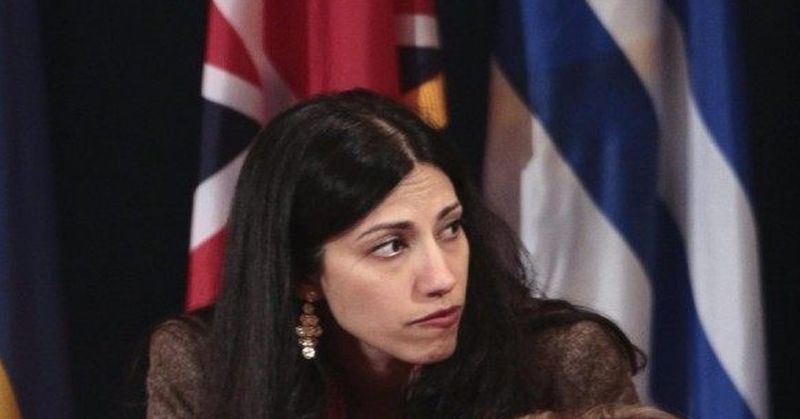 It’s beginning to look like the impermeable sheen that surrounds Huma Abedin is starting to wear off.

Reports are that she has pleaded ignorance over the emails that were found on her estranged husband’s laptop and was held up inside her New York City apartment on Saturday, refusing to come out.

She finally emerged Sunday morning at Clinton campaign headquarters for a brief visit, but would not speak to reporters.

On Sunday, her attorneys met with officials from the Justice Department and the FBI as they tried to get a search warrant from a reluctant Loretta Lynch that would allow them to examine all the contents of Weiner’s laptop.

Meanwhile, on the Sunday talk shows, Clinton’s campaign manager, Robbie Mook, spent most of his time throwing Huma under the bus, The Daily Caller is reporting.

While being questioned by Fox News’ Chris Wallace, Mook dodged questions about Hillary and her top aide.

“I’m asking you a direct question,” the “Fox News Sunday” host posed to Mook. “Has Secretary Clinton asked Huma Abedin what was on that laptop that she shared with her husband Anthony Weiner?”

“There’s credible reporting out there that this came from the laptop of Anthony Weiner and Huma Abedin,” he continued. “Why on Earth wouldn’t Hillary Clinton say to her closest personal aide, was there any stuff on your laptop, and what was it?”

“I appreciate your question because people want answers,” Mook responded. “There’s nothing about Huma Abedin in the letter that was sent out.”

“Why wouldn’t Clinton ask anybody? They could be emails from anybody in the world.”

Ok … so Mook kind of defended Huma in that interview … but watch his appearance on NBC’s “Meet the Press,” where he not only threw Abedin under the bus, but he backed up and ran her over again and again:

Host Chuck Todd asked if Huma was being “totally cooperative” with her. He refused to answer the question.

“I understand that,” Todd added. “I’m talking about you and the campaign. Do you feel as if you have all the facts?”

“That’s why we’re so puzzled right now. Just put the information out there so we can put this to rest.”