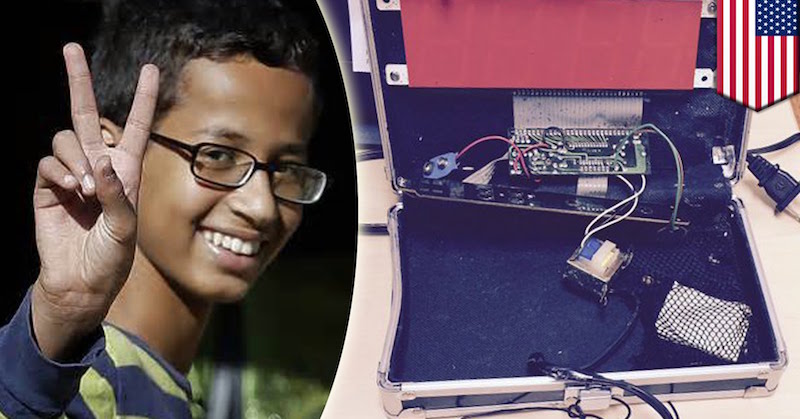 How exciting! “Clock Boy” has himself some new fans.

Ahmed Mohamed, the 14-year-old Texas high school student who brought a homemade clock to school in a small briefcase that looked remarkably like a bomb, won international attention when leftists called it “Islamophobic” that folks were concerned about the boy’s “project.”

The poor kid used his new-found fame to travel to the Middle East and even met with President Obama.

“Cool clock, Ahmed. Want to bring it to the White House? We should inspire more kids like you to like science. It’s what makes America great,” Obama tweeted in support of boy. A month later, Ahmed met Obama during White House Astronomy Night event on the South Lawn of the White House, PJMedia reports. Mohamed eventually moved to Qatar with his family and they’re suing the school district for $15 million

Well, “Clock Boy’s” success at winning over liberals and Obama was not lost on the terrorists, who featured Mohamed in their latest issue of Inspire.

Their glossy magazine features a picture of the two meeting, along with a picture of the clock and the cutline: “”Obama, ‘because of his sensitivity towards Muslim discrimination,’ sees an opp to further his PR by acknowledging a brilliant 14 yr old Muslim boy (who in fact even inspired us in a way).”

Along with the photo of Clock Boy is a story about how to build a package bomb, magnetic car bomb and door-trap bomb.

The “notes” page, which is featured in each issue of al-Qaeda’s magazine and sometimes contains attack clues, has a photo of San Bernardino terrorist Syed Rizwan Farook next to a photo of a pipe bomb, next to a sticky listing the dates of Memorial Day and Independence Day. “Confirmed — May 30, July 4” it says followed by two bullet points scratched out with a black pen and the footnote “please burn after reading.”

It also contains what could be an Election Day reference: “Hidden bomb, car bomb, pressure cooker, assassinations,” reads a checklist, followed by “make your vote count.”

The Justice Department launched an investigation late last year into the incident as a hate crime.