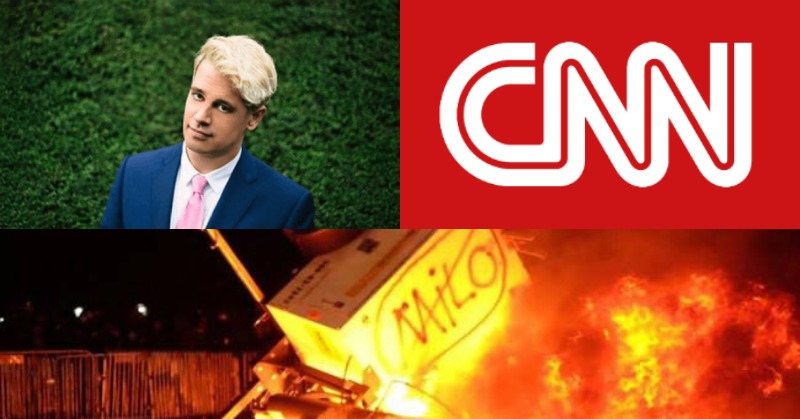 CNN decided to victim-blame conservative commentator Milo Yiannopoulos after violent riots broke out on the campus of UC Berkeley, where he was set to give a speech this week. The violent leftist rioters took to the streets in an effort to shut down free speech and they were successful — his speech had to be cancelled.

The fake news network implied, via the opinions of an anonymous “some,” that Yiannopoulos’ speech is “hate speech.” CNN wrote: “Yiannopoulos isn’t the only controversial speaker to try and capitalize on what some are describing as a ‘hate speech as free speech’ movement.”

In his campus talks, Yiannopoulos spares few targets. He’s gone after Black Lives Matter activists and has argued rape culture on campuses doesn’t exist. He portrays white males as victims and views social justice as a form of cancer. He has said people become feminists because they are “deeply physically unattractive.”

They forgot one point — he’s often right. He is outing the left’s dangerous agenda and that’s why they are terrified of him.

CNN went on to claim that Yiannopoulous’ “tour has coincided with a flurry of hate crimes around the country following Trump’s election victory — many of them on college campuses. In the month after the election, the Southern Poverty Law Center said 172 hate incidents were reported at colleges and universities nationwide.”

No mention of the fact that many of the supposed “hate crimes” alleged to have been committed by Trump supporters ended up being farces concocted by leftists and Muslims looking for attention.

A transgender UC Davis student, who asked to be identified only as Barbara, told CNN she was too scared to be on campus during Yiannopoulos’s scheduled visit and was fearful of his potential effect on her classmates.

Interesting that Barbara claimed to be afraid yet Trump supporters were the ones who got pepper sprayed and assaulted last night by violent leftists.

Leftists have labeled anything that they disagree with as “hate speech” and as Yiannopoulos noted, the left wants to attach him to certain movements in an attempt to smear him and shut his speech down — just like CNN tried to do here.

CNN’s piece, and numerous others, have tried to connect Yiannopoulos with “white nationalism.”

“I don’t have unsavory opinions about skin color … what you are seeking to do, by associating me with people who have odious and disgusting opinions, is suggest that I somehow in some way tacitly enable these people,” he said. “I don’t. F*ck you.”

Interestingly enough, CNN and other leftist outlets don’t seem too concerned about the black nationalism espoused by Rep. Keith Ellison — an elected representative — or his history of anti-Semitism …

“I have opinions that, frankly, a lot of people are thinking. They just won’t tell people. They don’t pollsters. They don’t tell journalists. But they think it, which is why you’re all so surprised when, you know, half the country voted for Trump. I hold perfectly respectable, reasonable opinions that half of America agrees with,” Yiannopoulos said.

“So long as people are prevented from saying true things in public life for political correctness, there’ll still be a need for me,” he continued. “And I’ll never stop.”

The left is violently working to shut down dissent and labeling opinions that challenge their orthodoxy as “hate speech,” which should terrify anyone who knows how critical the First Amendment is.