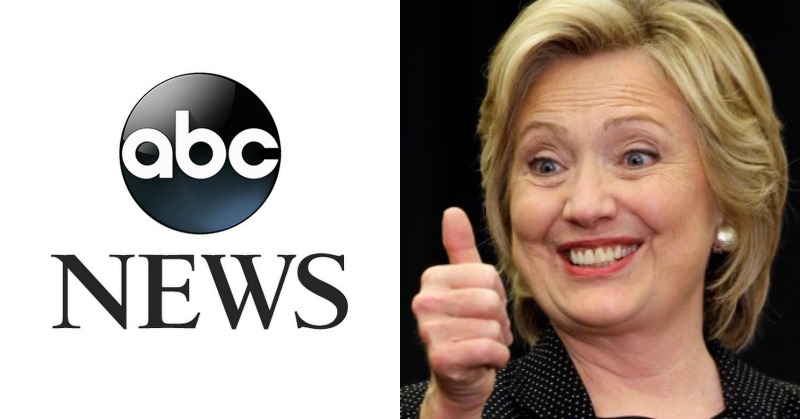 GOP presidential nominee Donald Trump has sounded the alarm about voter fraud and rigged elections — including the massive bias of the liberal mainstream media. After CNN boasted about an ABC News Poll that deceptively put Democrat nominee Hillary Clinton ahead by 12 points, Trump was vindicated once again.

The ABC News poll showed Clinton with 50 percent and Trump with 38 percent. There was one major problem with the poll, though — Democrats were oversampled by 9 percent. The Gateway Pundit reported:

What the media will not tell you is that 9% more Democrats than Republicans were sampled in the poll.

“Results have a margin of sampling error of 3.5 points, including the design effect. Partisan divisions are 36-27-31 percent, Democrats-Republicans-independents.”

Playing with polls is a common Democrat-media propaganda tactic.

Another email released by WikiLeaks from the account of Clinton campaign chairman John Podesta showed that the Democrats were lobbying for “oversampling” to rig the polls.

Here are the 3 Daily Tracking Polls that have been almost perfectly in sync almost every day. IBD was most accurate in 2012:

Once again, Trump was proven right about the biased media and the rigged polls. We have long known that the media was in the tank for the Democrats, but the many revelations in the WikiLeaks email releases have confirmed it.

The mainstream media wants people to think that the election is all-but won for Clinton and that the Trump campaign is a lost cause. They know this isn’t true, but as leaked WikiLeaks emails from the Democrat National Committee proved, the left doesn’t care about the truth.

The left knows that all they have to do is throw as many lies on the wall as they can and just see what sticks. It doesn’t even matter if the lie is shown to be true — their goal is to get it in the minds of as many people as possible.

That said, it actually could have the opposite effect. If they put polls out that show Clinton ahead by 12 points, some Democrats could sit out because they think that it’s in the bag. That would serve the media right.

Then again, it’s more likely that the media knows that the fix is in on a variety of levels and the rigged polls are an effort to explain away Clinton’s strong-armed win. The media will point to these polls if Clinton wins as if it were inevitable.

You can see what the media is setting up for, and if Clinton wins thanks to fraud, hopefully Trump fights back and it can be proven legally. That is precisely why Trump’s answer that he wouldn’t automatically concede the results of the election was so important.

The fix is in from every angle against Trump, and he absolutely shouldn’t roll over and take it if it can be proven. You don’t shut the door on that possibility, not with what we know is going on. To do so would be to hand over our country without a fight. There’s nothing respectable or American about that — it’s quite the opposite.