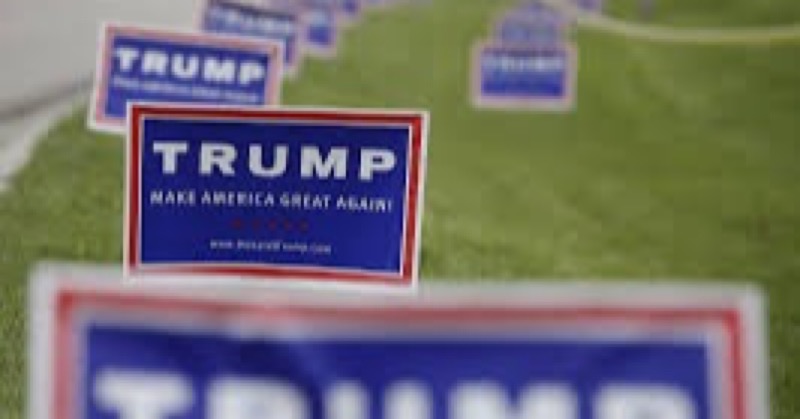 But enmity over Donald Trump brings out the best, or the worst in us, and Dr. Norman Muir is no exception.

The former official with Medaille College in New York was charged with petty larceny for stealing Donald Trump campaign signs from his neighbor’s front yard.

Here’s how it went down, WIVB is reporting:

Charlie Tulumello from Amherst is a big Trump fan, so like any local fan, he has some pro-Trump signs in his yard. When the signs were stolen the first time, he just assumed it was college kids playing a prank. But it kept happening.

So Tulumello set up some cameras to try to catch the pranksters. He was shocked by what he found.

Three times, a man — and twice with his dog — walked onto Tulumello’s property and ripped a total of seven signs out of the ground.

“My wife was very uneasy at night,” Tulumello said. “And if you’ll notice, changed the camera around for the other angle, I put the special sign up there trying to warn these people. Didn’t work. This fella just kept coming.”

Tulumello tracked him down, quickly realizing he was his neighbor, living just a few blocks away. He then handed over all the evidence, including the videos, to Amherst police, who promptly made an arrest.
Dr. Muir was charged with petty larceny and trespassing.

Although Muir told police he currently works for a local college, he was replaced at Medaille in July, according to the college’s website.

Muir declined to appear on camera, but said last Thursday he stole the signs because “I was angry with Donald Trump and the way he ran his campaign.”

“I wish I wouldn’t have done,” Muir said. “It was stupid. I feel ashamed that I did it.”

The local Republican party has offered to replace Tulumello’s signs.