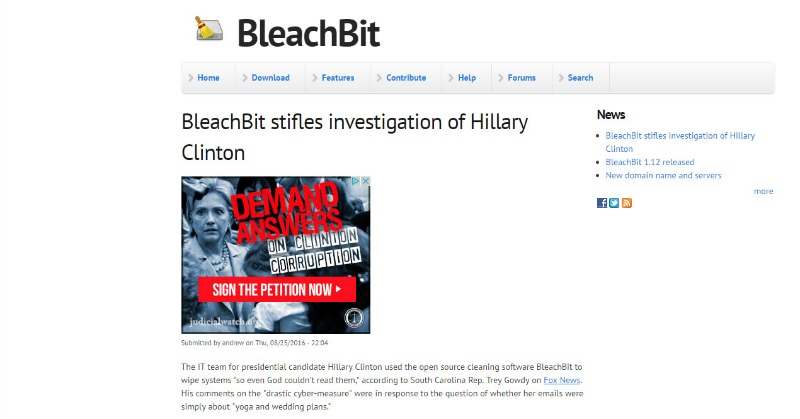 BleachBit didn’t waste any time and capitalized on the press it was receiving by releasing this statement on their website, including the video of Gowdy on Fox News:

“The IT team for presidential candidate Hillary Clinton used the open source cleaning software BleachBit to wipe systems ‘so even God couldn’t read them,’ according to South Carolina Rep. Trey Gowdy on Fox News. His comments on the ‘drastic cyber-measure’ were in response to the question of whether her emails were simply about ‘yoga and wedding plans.'”

“BleachBit is mentioned at about three minutes into this video that aired live on the Fox News television station.

‘She and her lawyers had those emails deleted. And they didn’t just push the delete button; they had them deleted where even God can’t read them. They were using something called BleachBit. You don’t use BleachBit for yoga emails or bridemaids emails. When you’re using BleachBit, it is something you really do not want the world to see.’

Perhaps Clinton’s team used an open source application because, unlike proprietary applications, it can be audited, like for backdoors. In response to the Edward Snowden leaks in 2013, privacy expert Bruce Schneier advised, ‘Closed-source software is easier for the NSA to backdoor than open-source software,’ in an article in which he stated he also uses BleachBit. Ironically, Schneier was writing to a non-governmental audience.

Last year when Clinton was asked about wiping her email server, she joked, “Like with a cloth or something?” It turns out now that BleachBit was that cloth, according to remarks by [Rep.] Gowdy.

@ThreatcoreNews compared the situation to the 18 minutes of audio erased from tapes from President Richard Nixon’s Oval Office.

As of the time of writing BleachBit has not been served a warrant or subpoena in relation to the investigation. BleachBit is free of charge to use in any environment whether it is personal, commercial, educational, governmental, Republican, or Democrat. The cleaning process is not reversible.

Immediately when the story broke the morning of August 25, traffic to the BleachBit web site and download servers spiked. As the story went viral on Twitter, a second, larger wave of traffic came to the site. The new servers are fully handling the loads.

Clinton’s lawyers supposedly only deleted emails that were personal, but Director Comey confirmed that of the 30,000 that were deleted, several thousand were work-related.

It’s unclear whether or not Clinton used BleachBit for the emails the FBI was able to recover.