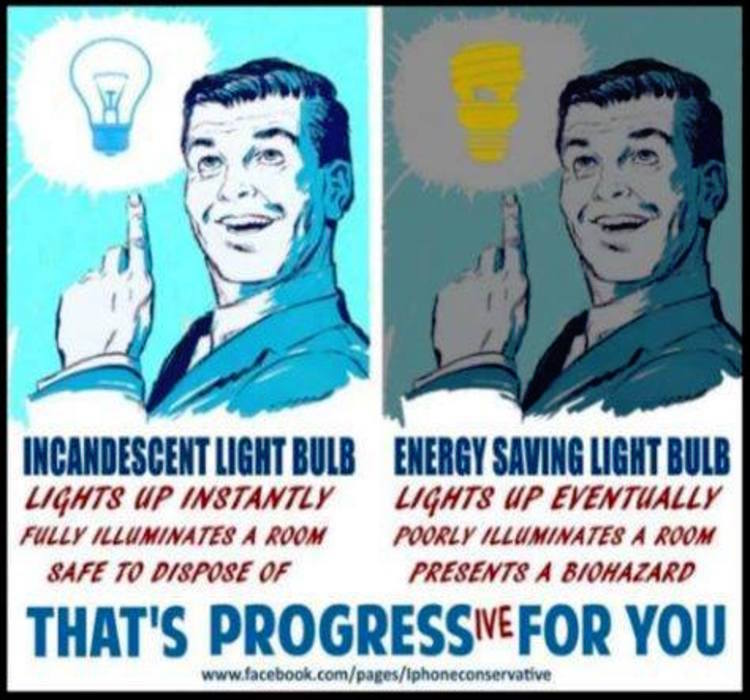 The first light bulb ban began back under George W. Bush in 2007. They were getting rid of old-fashioned incandescent bulbs, claiming they just waste too much energy.

Everyone was ordered to replace their perfectly functional old bulbs with new fluorescent bulbs.

Ignore that they were uglier, didn’t always fit and required a small hazmat team if one of them broke – Uncle Sam said use them and we had no choice.

The types of bulbs available expanded – LCDs, Halogen, LED, and so did the expense. A single bulb that sold for a couple quarters now could run more than $40. But some normal incandescent bulbs remained – namely the good-old “three-way” lights.

Well, with a midnight executive order, the 2007 bulb ban has now been extended to include three-way bulbs. And the reason is so typical of liberal Washington nonsense.

Three-way bulbs have two different filaments that light up at different times to create three different brightness levels. The Department of Energy ruled that these needed to be phased out because “DOE expects these sales will likely increase since these lamps could be used as replacements for other regulated lamp types.”

What that means is that consumers will start buying these bulbs because they don’t want to pay $40 for some crappy LED bulb. So the Obama Administration had to put a stop to that. The rule doesn’t go into effect for three years, The Washington Examiner is reporting, but it will likely mean manufacturing of these bulbs will stop pretty quickly.

Some bulbs are still exempt – for now, like oven lights and pet heat and plant lights.

The latter type of bulb requires the heat that these new-fangled bulbs can not generate, so you can’t eliminate them altogether. But you can make them much more expensive.

My son has a leopard gecko and we used to use a standard 75-watt bulb to heat his cage. The new bulbs simply don’t provide the heat he needs, so now we’re forced to go to a specialty pet store and buy “heat lamp” bulbs for the creature.

Hopefully this is the last of the bureaucratic nonsense coming out of the White House for some time.

But idiocy is hard to pick out … it becomes entrenched. It might take some time.