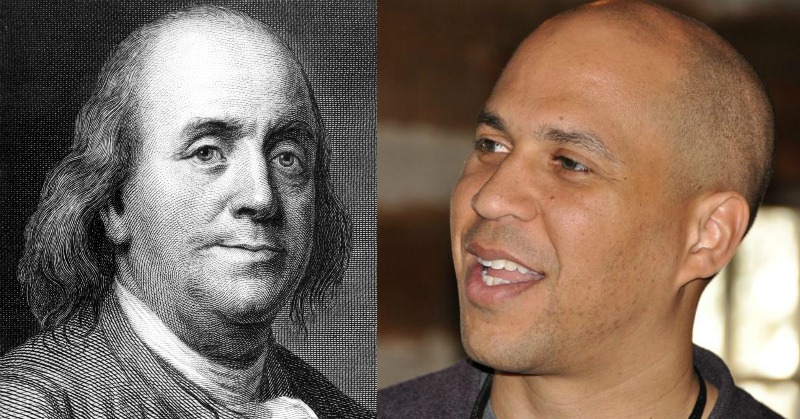 Sen. Cory Booker appears to have a bright future ahead of him as a mainstream media hack, as he took to Twitter with what he thought was a quote from Benamin Franklin in an effort to attack President Donald Trump, but appears not to be a Franklin quote at all.

Booker tweeted Monday morning: “‘It is the first responsibility of every citizen to question authority.’ Benjamin Franklin.”

"It is the first responsibility of every citizen to question authority."
Benjamin Franklin

And a screenshot for good measure… 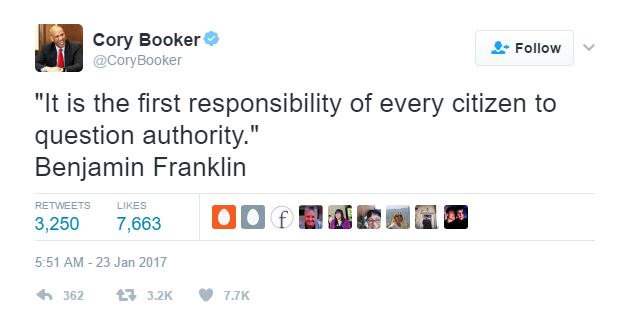 But the Daily Caller News Foundation reached out to Dr. Blaine McCormick, chair of the Department of Management at Baylor University as well as a Franklin scholar, to find out if the quote was authentic.

McCormick made it perfectly clear that the quote was a “hoax” and not “a valid Franklin quote.”

This does not appear to me to be a valid Franklin quote. It doesn’t even sound 18th century, does it? “Questioning authority” is a much more modern idea. Franklin was more into “rebellion to tyrants is obedience to God”.

But let’s not trust my “ear” to detect if this sounds appropriately Colonial. Let’s check: The first place I look is the Franklin Papers at Yale University and the quote does not surface. You will find the “rebellion to tyrants” quote in the papers, though. Further, Franklin was a much better write than this. A more authentic Franklin quote might read, “The first responsibility of every citizen is to question authority” and I suspect Ben would add “…every good citizen…”.

So, why start the sentence with “It”? Even if Franklin were to start a sentence with “it” he would use the more Colonial version such as these quotes, “Tis easier to prevent bad habits than to break them.” (BF, 1745) or “Tis a well spent penny that saves a groat.” (BF, 1749) There are many more authentic Franklin quotes which begin with “Tis” (short for “It is”, just to be clear).

Whoever perpetrated this particular hoax would have helped themselves by at least penning, “Tis the first responsibility of every citizen to question authority” to Franklin instead.

The idea is not something propagated by Franklin, but nonetheless Booker sent it out as true in another protest of the Trump administration. The DCNF continued:

TheDCNF reached out to Booker’s office by phone and email. His communications director, Jeff Giertz, sent a sarcastic reply that did not meaningfully address why the senator or his staff would tweet and Facebook a false quote from a Founding Father to thousands and thousands of people: “As Ben Franklin may or may not have said, ‘to err is human; to forgive, divine.’”

When asked if that meant Giertz was fine with his senator tweeting and Facebooking inaccurate quotes to thousands of people, Giertz did not reply.

The response from Giertz is typical of the Left. It encapsulates their massive hypocrisy perfectly. Can you imagine if someone on the right tweeted a mistake like that? When Trump puts out a tweet with a typo, Leftists jump all over it.

Booker should absolutely correct and apologize for the mistake and a sarcastic response from his communications director sums up the arrogant hypocrisy of Leftists.

In fact, Booker should take a look at that tweet he thought was so profound and hold himself to it. He is in a position of authority and thankfully The DCNF took the time to question him instead of allowing the senator to peddle the fake news that the liberal mainstream media has cornered the market on.