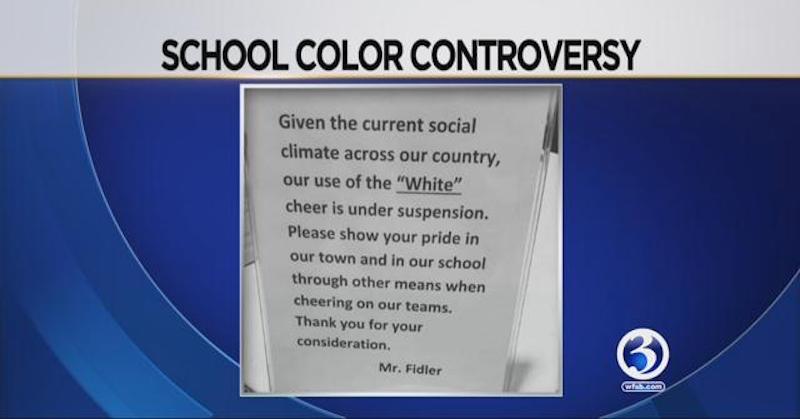 A High School principal in Connecticut has gone off the deep end.

He’s decided that students can’t chant the name of the school colors because it might be considered “racist.”

The colors are “blue” and “white.”

For years, the students at East Hampton High School have chanted “Blue!” and “White!” in a school-spirit yell. But principal John Fidler said the word “white” could be construed as “racist” and so the cheer itself is “under suspension,” EAGNews reports.

Of course, this kind of nonsense has students and parents outraged.

“ … this stuff has me outraged they are trying to take a simple chant that our school has done for years and years,” Jordan Michnowicz posted to Facebook. “They are trying to make it about race.”

Student Brandon Kochuk pointed out that “the seniors all they say is white. They don’t say white power or anything involving race they are just saying white.”

A note was written earlier in the week by the principal, who said that because of the current “social climate” across the country, the use of the word “white” was under suspension.

“It’s kind of outgrown just being done in our gym and at pep rallies and there’s a time and a place where the cheer is appropriate and a time when it may appear insensitive,” said school Superintendent Paul Smith.

“It’s not really that big of a deal to me or to any of our sophomore class. I don’t understand why it’s a problem now,” said East Hampton student Kylie O’Brien.

Brandon Kochuk posted “when the seniors cheer all they say is white. they don’t say white power or anything involving race they are just saying white.”

After a meeting Thursday, they decided to revoke the suspension and allow students to say the word “white” in a cheer.

“He is not telling them what they can say and can’t say in the gym at the games. He wants them to come but he also wants them to reflect the positive things they do outside of the gym as well,” Superintendent Smith said.

He added that the timing of the note and the discussion was to coincide with the start of winter sports where gyms will be used weekly and the cheers will be heard bouncing off the walls.