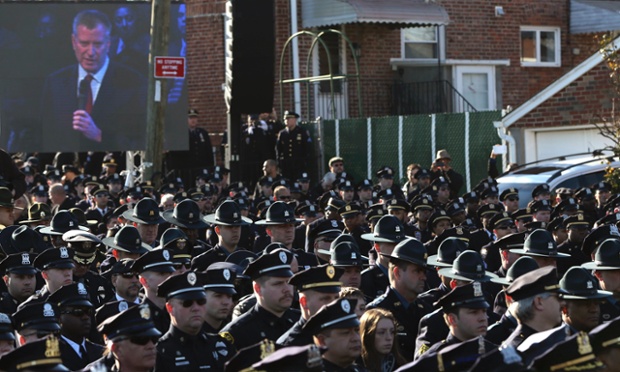 Cops turn back on de Blasio. Photo by Reuters

The tension between NYPD and Mayor de Blasio has not eased up over the past few days.  During slain Officer Ramos’ funeral as de Blasio was speaking at the request of his family, thousands of police officers turned their backs on the mayor.

This comes a couple of days after a banner was flown stating that cops have their backs to him. Officers also turned their backs on de Blasio when he went to the hospital to pay his respects to the fallen Officers.

It is clear that de Blasio’s statements and actions before the execution of the officers and even during his election have done nothing but continue to anger the NYPD.  It appears that no matter how much de Blasio attempts to right his wrongs (whether real or perceived) he has lost the one group that he really needs the most in order to run NYC successfully.

Hundreds of police officers turned their backs on a screen showing New York City Mayor Bill de Blasio as he spoke at the funeral of one of two officers killed last week in what has been called an “assassination.”

The funeral at the Christ Tabernacle Church, in the Glendale neighborhood of Queens, was broadcast to thousands of police who gathered outside.

The killing of Officers Rafael Ramos and Wenjian Liu came amid heightened tensions between the police and the mayor over what some police saw as a lack of support for the force.

The atmosphere was mostly respectful, but there were scattered signs of protest even before the police officers action when the mayor spoke.

Thousands of cops turn their backs away from @deBlasioNYC as he eulogizes #NYPD Ofcr. Rafael Ramos. pic.twitter.com/bXNU6z23rD

This sign saying “Dump @deBlasioNYC” was along the passageway the mayor walked to get into the #NYPD funeral. pic.twitter.com/0SmsCS76WL

After initially facing forward nearly all NYPD & other officers have now turned their backs as Mayor de Blasio speaks pic.twitter.com/Fz2wHKZNXn

Every one of the 30,000 plus officers on the streets has now turned their backs 180 degrees as DeBlasio speaks. #nypdlivesmatter

Would you have turned your back to the mayor?