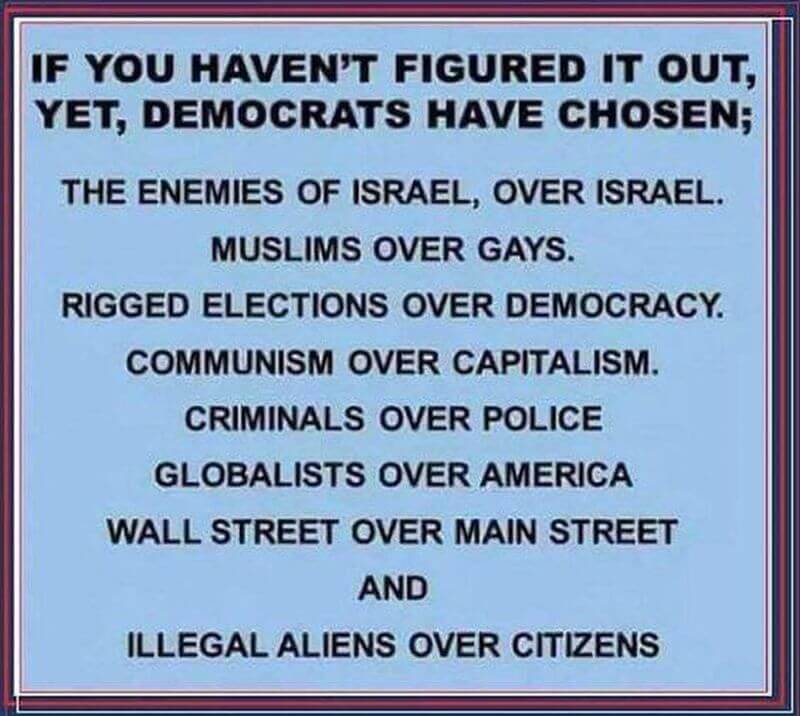 Today’s Democrats prioritize the enemies of Israel over Israel, illegal aliens over citizens, communism instead of capitalism, rigged elections over Democracy, criminals over police, globalists over America, and Wall Street over main street.

Here’s the perfect example of the Democrat’s priorities:

PA Republican Rep. Martina White took Democratic Philadelphia Mayor Jim Kenney to task on “Fox & Friends” Monday over his decision to end a data-sharing contract with ICE, despite the risk to public safety.

“Oh, dear. It’s truly shocking that the mayor was willing to end a contract that was actually helping to keep our community safe. Federal immigration officials were using this system to access information about people who were previously arrested who committed a crime other than being here illegally.”

KENNEY: “We’re not going to provide them additional information so they can go out and round up people glmple if I could abolish ice, I would. But we can abolish this contract and we are.”
[clip ends]

WHITE: “Good morning. Thanks for having me.”

DOOCY: “What’s up with the mayor out there.”

WHITE: “Oh, dear. It’s truly shocking that the mayor was willing to end a contract that was actually helping to keep our community safe. Federal immigration officials were using this system to access information about people who were previously arrested who committed a crime other than being here illegally.”

DOOCY: “So ultimately, what is his end game here.”

WHITE: “You know, public officials and activists, they make a claim that victims and witnesses are not able to come forward. But the reality is that they most definitely can come forward if they feel that they are a victim of crime. Actually federal immigration officials provide an incentive to do so. They have a Uvisa that they offer to people here undocumented that may be a victim of crime. They can come forward and report the crime and actually obtain potentially an opportunity to get legal status.”

DOOCY: “You would think he would be for that.”

WHITE: “You would think. In 2010, I mean, the rationale that the mayor is currently using in 2010, the old mayor, Michael nutter actually excluded the sharing of information about witnesses and victims. So, it’s really not a good rationale, if anything.”

DOOCY: “No kidding. Ice has issued a statement. And they say this. Ice is deeply disappointed with the city’s decision, despite these attempts to obstruct ice’s lawful efforts to apprehend criminal aliens. The ailing remains committed to its efforts to uphold public safety in the city of Philadelphia. It does sound like the mayor is part of the abolish ice, you know, they can’t do anything right movement.”

WHITE: “I think he actually stated that he wanted to abolish ice and he didn’t even provide any kind of explanation as to why he was willing to just completely get rid of it entirely and not replace it with any alternative or do reforms. It was merely just a statement, obviously, to cater to folks who aren’t necessarily the folks of Pennsylvania.”

DOOCY: “For you it’s a matter of safety.”

WHITE: “Safety is the responsibility law enforcement doing this job every single day have the resources they need in order to keep our community safe.”

DOOCY: “We will see what happens. State representative from the great state of Pennsylvania Martina white. Thank you very much.”