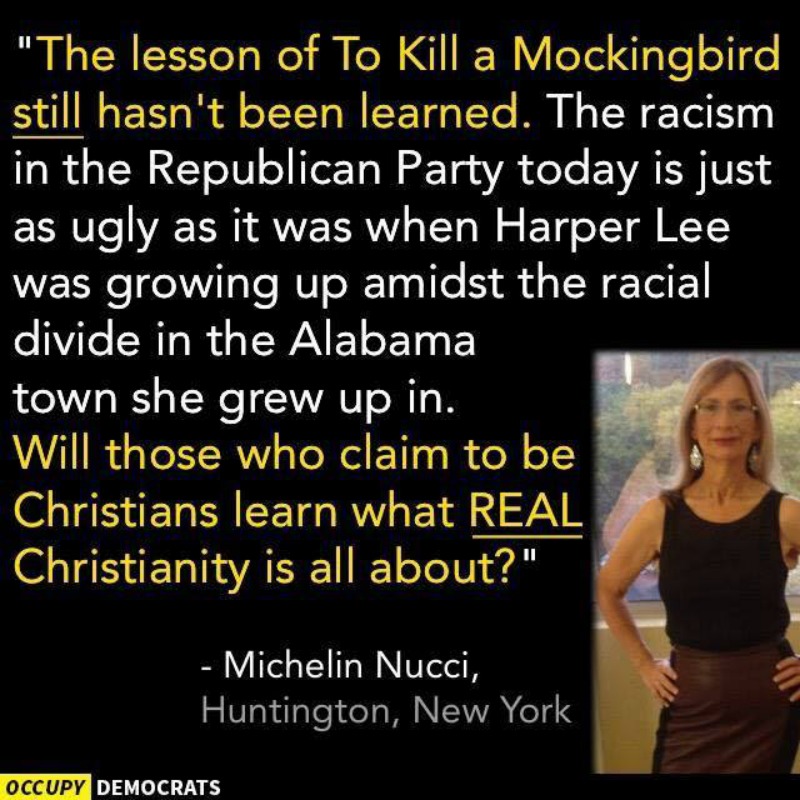 Clearly this woman doesn’t know much about history. Somehow the Republican Party is being blamed for the disgusting racism and hatred of the Democrat Party that is still a huge part of the party today.

If you haven’t read the classic To Kill a Mockingbird, you should. They used to teach it in high school but many schools are stopping this because ZOMG racism in the South.

Most likely they are ending the required reading because it is further proof of Democrats’ racism.

This ignorant woman needs a history lesson. From Encyclopedia of Alabama:

Other considerations also helped in the development of one-party Democratic politics. Party leaders and candidates frequently told voters that the continuance of white supremacy required support for the Democratic Party. Indeed, a “white supremacy” slogan appeared on the Democratic Party’s election ballot until 1966. Further, because the party won all statewide and most local elections, qualified and politically ambitious potential candidates almost always chose to run on the Democratic ticket. With a near monopoly on the best candidates, Democrats continued to win in Alabama. The party also implemented a “sore loser” law that prohibited disgruntled primary election losers from re-entering an election contest as independents or as candidates for another party. Additionally, the party had a symbolically important, though probably unenforceable, “loyalty pledge” (which still appears on Democratic primary election ballots) committing those who participate in the primary election to support the party’s candidates in the general election.

Despite these provisions, practices, and requirements, the Republican Party did maintain a presence in the state during the early twentieth century. Although many black Alabamians were disfranchised, they generally remained loyal to the Republican Party. There were also significant pockets of white Republicans, especially in northern Alabama.

And no, the Dixiecrat Myth of Democrats shifting over to become Republicans is just that, a myth. It’s a lie perpetrated by Democrats because they REFUSE to own their horrific history of racism that still exists to this day.

Not sure who this ‘Michelle Nucci’ person is but apparently she believes SHE knows what ‘REAL Christianity’ is all about. Considering she doesn’t have a clue about the history of Alabama OR the Democrat and Republican Parties, the odds of her knowing much about Christianity are slim to none.

Apparently Occupy Democrats have hit bottom. They are now using quotes from random ignoramuses they find on social media.