Today, a sitting New Hampshire House State Representative, Katherine Rogers (D-Concord), pleaded guilty to assaulting a citizen during a ballot recount in 2016. The assault had been reported after the legislative session ended and an investigation took place.

According to the Patch:

A local Democrat and state representative pleaded guilty this morning to assaulting a political opponent during a state Senate ballot recount in November 2016. State Rep. Katherine Rogers, D-Concord, 61, pleaded guilty to the assault charge as part of a plea deal that would help her avoid jail time as well as a fine so long as she stays out of trouble during the next year and attends anger management classes during the next 90-days. Both Rogers and the victim – Susan Olsen, a former state representative candidate from Warner and a well-known 2nd Amendment rights activist – were in Concord District Court on Dec. 22, 2017, for the plea and sentencing.

Back on Nov. 16, 2016, during the recount for the District 7 state Senate seat held at the state archives building, Rogers put her arm around Olsen and then struck her with a semi-closed right hand on the side of the head.

Political Buzz reached out to the victim, Susan Olsen, who provided the following response:

I will tell you right now that had it not been for the fact that one unimpeachable eye-witness came forward voluntarily after Rogers’ attorney called my complaint a “political stunt”, her conviction would never have happened.  And I imagine moving the trial management date to the Friday before a long Christmas holiday was an attempt to keep the whole thing quiet.  I guess neither WMUR, nor NH1, nor the Concord Fishwrap nor the Union Leader believe that a state representative being tried for assault was worthy of getting out into the snow.

Do not get me wrong. This has nothing to do with politics. I have worked well with Rep Rogers and Susan Olsen over the years and I get along well with both of them. But being guilty of assault is “guilty.” The House of Representatives must be above this. I wish Rep Rogers all the best but the institute of the House must be held to the highest stands possible. I wish Susan Olsen all the best and hope she can put this behind her.

According to the Patch, Rogers’ had the support of fellow Democrats during her guilty plea deal:

A contingent of elected Democrats and other activists were in attendance to support Rogers including Ray Buckley, the chairman of the New Hampshire Democratic Party, Minority Leader Steve Shurtleff, D-Concord, Kris Schultz, D-Concord, Ken Roos, a labor activist, state Rep. Tim Horrigan, D-Durham, and others.

These are some of the same people called for the resignation of a Republican Representative last year who anonymously posted misogynistic comments on a forum, long before he was a representative. The man committed no crime. These are the same people who have consistently overlooked the violent rhetoric and heinous behavior of Democrat State Representatives like Sherry Frost.

Clearly, Democrats have an issue with violence and violent rhetoric from their own members. This behavior isn’t acceptable from anyone but especially not acceptable from a sitting state representative. Citizens shouldn’t be afraid to get involved in the political process, especially something as simple as a ballot recount.

It seems Democrats have serious issues with the House Code of Ethics. Their response to this outcome will be telling.

So far, Democrats in the state have remained SILENT on demanding this state rep resign. If she were a Republican, they would have demanded she resign before due process even took place.

If Democrats didn’t have double standards, they’d have no standards at all.

There is even a petition that’s been started, demanding her resignation: 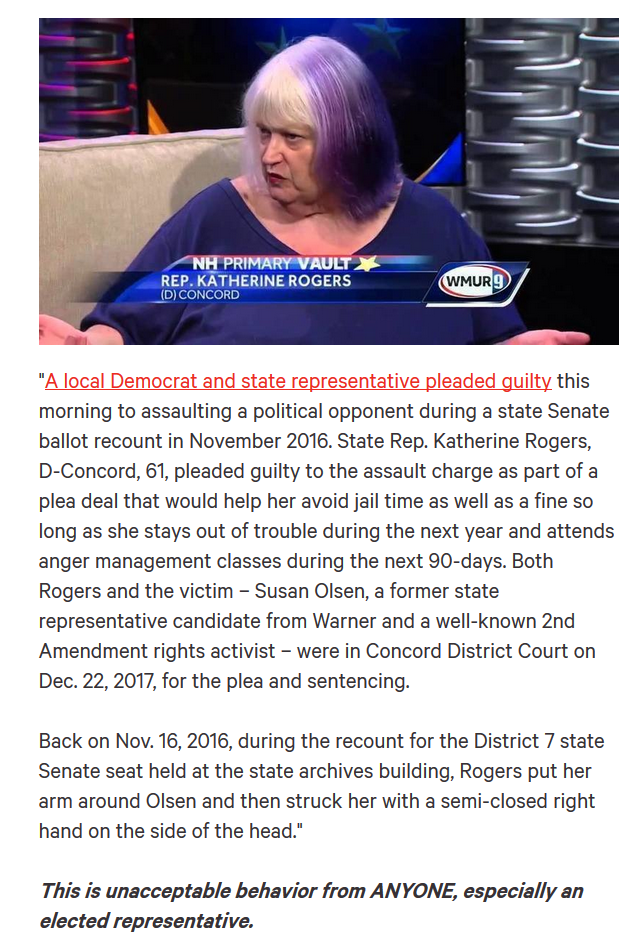